Her name is Poppy – a name chosen in a nationwide contest by the Guides and Brownies.

The War Horse memorial was unveiled June 6 at the Ascot racecourse. The bronze sculpture stands in honor of the millions of animals who died during WW1 pressed into service by man.

The memorial is the work of equine sculptor and artist, Susan Leyland. The bronze piece is 8’ tall by 13’ wide. It stands atop a 9’ Portland stone plinth.  The L300,000 cost was partially funded through the Royal Borough of Windsor and Maidenhead’s public arts budget but the majority was raised through public donations. 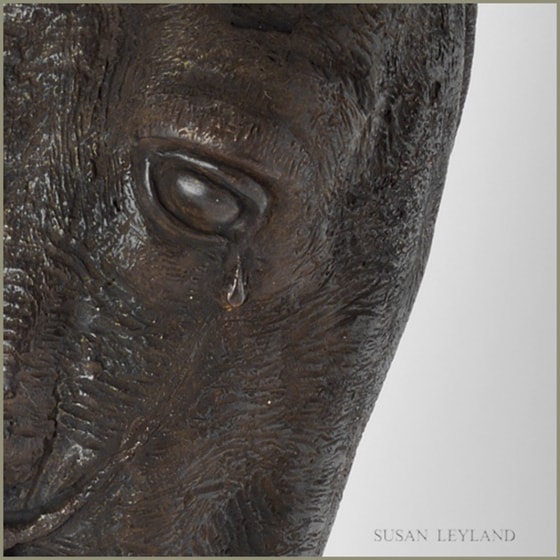 Her head is bowed in mourning, her body starved and scarred and a tear falls from one eye in memory of her fallen comrades. Her ears are pricked to denote that she is now free from the burdens of war represented by a coil of barbed wire at her feet.

About Poppy, Leyland explained: “I have had the great honor and privilege to create The War Horse Memorial. I have portrayed a horse standing motionless, in poignant remembrance. A horse whose silhouette, shape, body language, anatomy and detail incorporate and reflect the tragedy of all those horses, mules and donkeys who endured the 1914— 1918 Great War. The only movement is in the tail, caught in a slight gust of wind, to give a sign of life and hope for the future that their sacrifice was not in vain.” 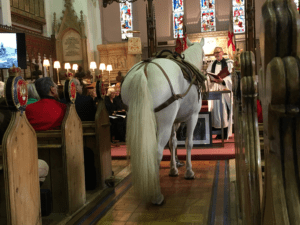 The unveiling follows an earlier blessing ceremony, April 17, held at the Household Cavalry’s garrison church in Windsor. The event featured two riders and horses outside in period attire and was highlighted by Maggie the mare led down the church aisle bearing wartime panniers on her back containing two brass shell cases retrieved from the Somme. The ceremony included the reading of poems written for the War Horse memorial and the first public performance of “Elegy to the War Horse” composed by Major Craig Hallatt, director of music for the Household Cavalry.

More than 60 WW1 artifacts, donated by the public, were blessed and sealed in a time capsule at the base of the memorial. Medals, photographs, a pay book, coins, letters, barbed wire and soil from the Western Front, horses’ plumes and harnesses and a copy of a Victoria Cross.

“They will be there for all time as a symbol of our remembrance of everything these remarkable animals did for their country,” said War Horse co-founder, Alan Carr.

August 23 has been designated “Purple Poppy Day”, 2018 marking the 100th anniversary of the slaughter by machinegun fire of the British cavalry at the Battle of Mons.

A Soldier’s Tribute to His War Horse

One artilleryman recorded in his diary the day one of their war horses died from hunger.

“Sailor would work for 24 hours a day without winking. He was quiet as a lamb and as clever as a thoroughbred but he looked like nothing on earth, so we lost him. The whole artillery battery kissed him goodbye and the drivers and gunners who fed him nearly cried.”

Poem on the Memorial Maquette 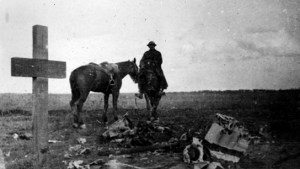 The WW1 Horse Who Returned
By Susan Leyland

From this peaceful Land
To Hellfire we were sent.

Through horror, fear and pain
Knee-deep mud, cold and rain
We heaved and pulled
With little to sustain.

We don’t feel like heroes,
Though heroic tasks were done.
We knew it was our duty
To get the battle won.

I am home again at last,
My legs are swollen and my body weak,
My skin and cuts are healing,
But I will not forget.

So here in silence with lowered head
Over the bones of fallen friend
I stand forever to honour
All those who came not home.