Curly Sue is a mule employed by the city of Walla Walla, Washington. She carries tools and gear up the steep hillsides of the local watershed to assist the attendant with maintenance and patrols. The attendant ensures the safety of the city’s water supply. After 18 years serving the community of some 32,000 residents, Curly Sue retired in August (replaced by a four-wheeler). 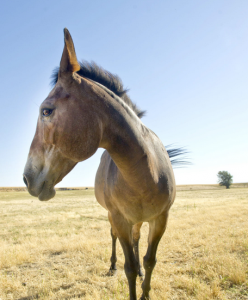 Before the 29-year-old mule could enjoy retirement, she first needed City Council approval, which it gave unanimously voting Curly Sue as surplus. Thus having been declared of “no use” to the city, the mule was liquidated. But Curly Sue didn’t go to the auction block. Curly Sue was officially consigned to spend the rest of her life on the water department grounds, where she was well cared for by staff. Curly Sue’s every need was met except one, she was alone.

“I have driven by Curly Sue every day, back and forth, and seen her all alone,” said local resident Carol McIntyre.

Then one day, Carol got a notion and acted upon it. She went before the City Council and proposed that Curly Sue move a few miles down the road to her farm. There she could spend her retirement with the company of Carol’s two horses. The Council unanimously agreed. Curly Sue was sold for $1 to Carol McIntyre.

Curly Sue was soon transported down the road where she now enjoys a leisurely retirement with a few horse friends.

“I don’t think she moves very fast,” McIntyre said. “But lately she has been trotting up to the fence … I like to think we have developed a relationship with each other.”