The Secretariat Vox Populi award, established in 2010 by Penny Chenery (Secretariat’s owner), recognizes the racehorse whose accomplishments have captivated the public’s attention. The winner is chosen by you, everyone may vote through an online poll. 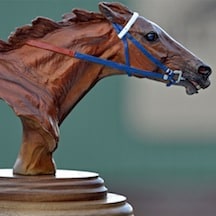 “Horse racing already has established avenues to award outstanding accomplishments, and we certainly should honor superior performance. But achievement can be measured in many ways, and fans occasionally feel a disconnect when the horses who most impacted the public are not recognized through the traditional equine awards. The industry is long overdue in annually acknowledging the star horse who brings the most excitement and attention to the sport. It is my hope that the Secretariat “Vox Populi” Award will be an honor that reflects the heart and soul of racing and will help build upon the devotion the public has for a horse they love.” – Penny Chenery, 2010

How to Vote
Fans may vote for one of the five nominees or write in their own candidate. Voting is open through November 30. The winner will be announced January 12, 2019 at Santa Anita Park.

Update 12-3-18: Your votes have been cast and tallied. The winner of the 2018 Secretariat Vox Populi Award is WINX!
The Australian 7-year-old super mare was the top choice among U.S. voters as well as abroad, Winx has cultivated the devotion of an international legion of fans with her amazing streak of 29 (and still counting) consecutive victories. The award ceremony will be held January 12 at Santa Anita Park (California). The public is welcome!