Too Much of a Good Thing

Vieques is a small island off the coast of Puerto Rico, part of the Spanish Virgin Islands. Its culture retains influences from 400 years of Spanish occupation. Two thirds of the island was purchased/seized by the United States Navy during World War 11 as a possible refuge for the British fleet in case Britain fell to Nazi Germany. After the war it was used by the US Navy for military exercises and munitions testing. In 1999 a Vieques native was killed by a misfired Navy jet bomb. Natives embarked on a campaign of civil disobedience which resulted in the Navy’s withdraw from the island in 2003. Today Vieques is a popular tourist destination famous for its turquoise waters, dense mangroves and horses.

First imported by Spanish colonists, horses are used by many of Vieques’ 9,000+ residents for running errands, taking children to school, transporting fishermen to their boats, competing in informal races between teenage boys and delivering late-night drinkers back home. They’re adored by tourists, who love taking pictures of them eating mangos and frolicking on the beaches.

Many locals keep their horses in open fields near the sea, where they graze until they’re needed next. Feeding and sheltering a confined horse on an island with a median income of less than $20,000 a year is out of reach for many. Some horses are branded, many are not and a few just run wild.

Officials say that as a result, it’s nearly impossible to control the horse population and hold owners accountable. The population has grown to an estimated 2,000 animals that break water pipes to quench their thirst, knock over garbage cans in search of food and die in car crashes.

“There are more and more horses all the time,” said Vieques Mayor Victor Emeric. “It’s not that easy to solve this problem.”

Emeric called the Humane Society, which developed a five-year program to dispatch teams to Vieques armed with compressed-air rifles, pistols and hundreds of darts loaded with the animal contraceptive PZP.

According to the Humane Society the use of PZP in wild horse herds has been studied extensively for more than 20 years, and proven to be more than 90 percent effective and safe. The use of PZP will not only gradually reduce the island’s wild horse population, but it will also help alleviate some of the human-horse conflicts, and result in an overall improvement in the quality of life for the horses. Treated mares will see increased health benefits without the stress of repeated pregnancy and lactation in an environment with few basic resources. In the long term, the competition for scarce resources will decrease as the population stabilizes and declines to sustainable levels. 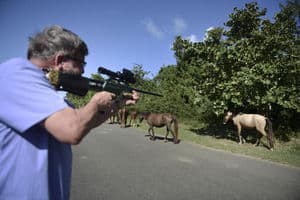 The darting program launched in November 2016 with annual cost up to $200,000 funded entirely through donations. Stephanie Boyles Griffin, the Humane Society’s senior director of wildlife fertility control programs, said she expects the horses to be healthier and live longer, noting that the oldest horses on Vieques are 7 to 10 years old, while the average lifespan for wild horses is 15 to 20 years.

The logistics of darting are tricky. Wildlife experts have to identify hundreds of mares, register their GPS coordinates, photograph them, assign them a number and give them their first shot. Then they have to find them again several weeks later to give them a second injection that they’ll receive annually.

Many locals have embraced the darting program leading dozens of their horses to a recent Humane Society-sponsored event for contraceptive shots and deworming. Among them was 19-year-old Jesus Miranda, who said his family owns six to eight horses that he rides several times a week. He brought two horses to the event, Wifi and Burro Fly.

“It’s in our blood, you understand?” said Miranda, who knows his horses’ birthdays by heart.

Over the Martin Luther King Day weekend volunteers and Humane Society employees doubled down on darting efforts. More than 160 mares received the contraceptive and officials expect to inject all the island’s mares by year’s end.

The Humane Society’s program was welcome news for Juan Angel Santos, a 54-year-old construction worker who said he couldn’t imagine Vieques without horses.

“I prefer to ride horses because I never learned how to drive,” he said. “It’s best to be on a horse.”

In addition to darting mares the Humane Society program includes supportive tactics. They work to educate and engage the public, train local cowboys to help with darting and to eventually take over sustaining the program, provide fresh water resources away from roads for the horses and provide regular vetting festivals for locals to bring horses. Long term the Humane Society hopes to establish a permanent presence in Puerto Rico.