The Remarkable Homecoming of the “American Girl”

“American Girl” was a famous harness racer who died during a race in1875.

“Weak-jointed, loose-gaited, worst looking, crooked-legged filly that was ever foaled in Peekskill, but grew into an outstanding specimen of a Standardbred horse”.

The 13-year-old bay mare had quite a racing reputation by the time she arrived at the Eldridge Driving Park in Elmira, New York to compete in its inaugural harness race in October 1875. American Girl was owned by William Lovell of New York City and valued at $25,000 which was quite a sum for the time. She raced 52 times between the years 1868 and 1875. In 1875 she had only won one race so far, but she was the hands down favorite to win at Eldridge. Confident in her abilities, betters wagered $20,000 for the win. 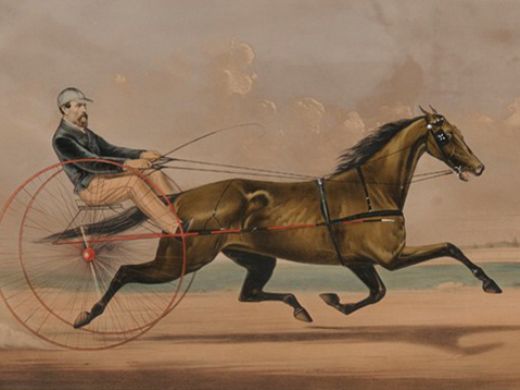 On that October morning, American Girl was believed to be feeling well after recovering from a “prevailing epizootic.” She was driven by John L. Doty, and appeared at the start to be in the very best condition.

As American Girl made the first turn she was well ahead. At this point her driver noticed that she seemed to be giving out, and let her head loose. She kept staggering for an eighth of a mile, and at the quarter-pole fell and died instantly without a struggle. She fell very easily, with her shoulder against the fence. A slight rain was falling and the western sun formed a very clear and distinct rainbow.

“The Eldridge Driving Association thought so much of the horse that they agreed to have the horse buried near the spot where she died. They commissioned $2500 for a statue in her honor,” explained Mike Robertson, President of the Eldridge Park Carousel Preservation Society. 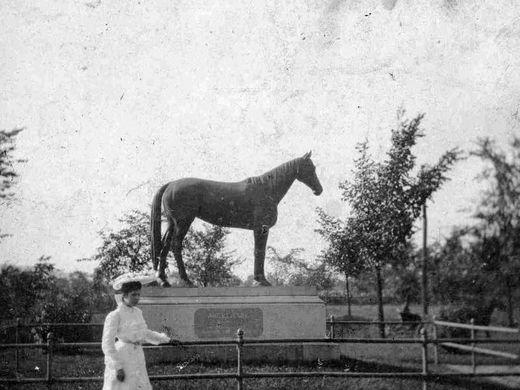 The statue was installed a year later, in 1876, at the racetrack. After 1883 the track was closed and the statue was moved to another section of the park. It stood for decades until 1980 when vandals destroyed it. The statue was left in 147 pieces. Artisans and craftsmen were consulted but none thought the statue was salvageable. 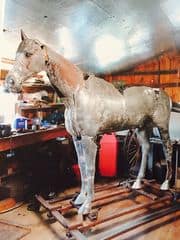 Three years ago Tom Beatty, one of the park’s main ride mechanics, volunteered his expertise to reconstruct the statue. The broken pieces were brought from storage and restoration began. 90% of the original statue was salvaged but Beatty had to reconstruct American Girl’s back using fiberglass. Many in the community volunteered to work on the statue and others raised money to fund the project. 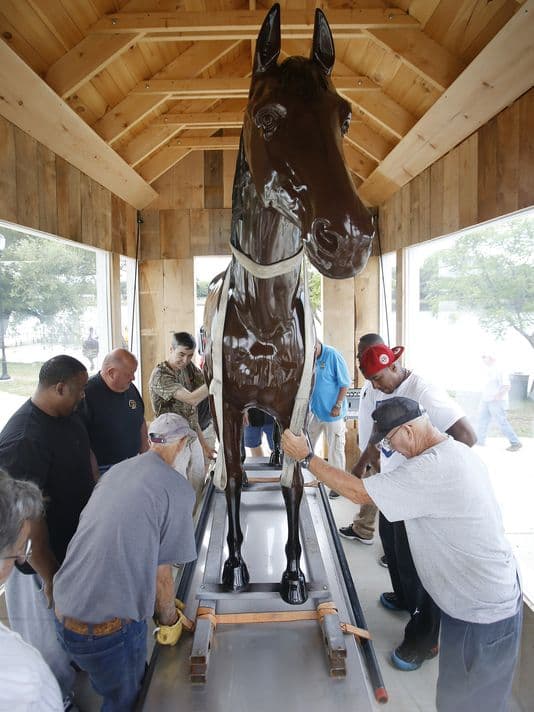 On June 29, 2016 the statue of American Girl was re-instated at Eldridge Park. To provide better protection, a glass-enclosed, Victorian barn style enclosure was built to house the statue.

“This is special, because this statue is the only known relic that we have that dates back to the original Eldridge Park of the 1800s,” Robertson said. “It’s been at the park since the day it was commissioned. American Girl is a piece of the park; it’s a piece of history. And to have her back at the park for public enjoyment is huge. We are ecstatic. A lot of hard work has gone into it.