Steely Nerves and Britches Too!

The Tevis Cup is one tough endurance challenge, 100 miles in under 24 hours through the Sierra Nevada Mountains in California. Half of those who start the Ride fail to complete it, with horses succumbing to lameness, metabolic issues, and riders succumbing to exhaustion and dehydration. Enormous blocks of granite, raised and tilted by geological forces over eons, dominate the terrain. Sloping peaks of rock and slashed by steep cliffs and deep canyons and alpine lakes make for difficult riding. The elements of the Ride are as unforgiving as the terrain with temperatures ranging from 40F to 120F.

“You have to have the mental strength to keep going no matter what, even at a snail’s pace,” says Horn. “Some people call it ‘the Tevis Trudge,’ you just keep moving at whatever pace you can, eating the miles and getting it done,” says Devan Horn, a three-time competitor. “You have to just keep putting one foot in front of the other, one step at a time.” 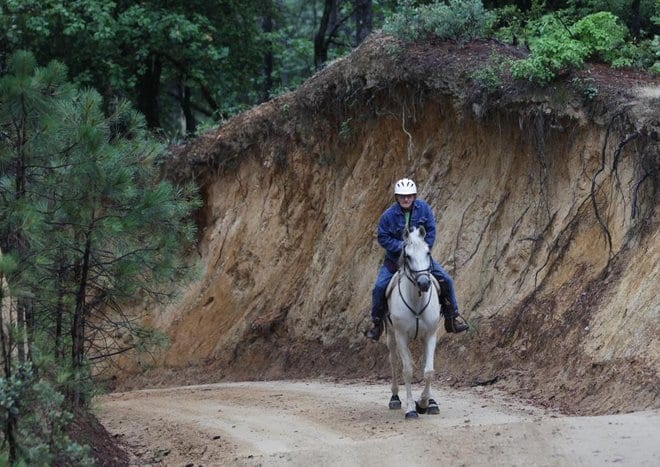 “This has been my dream for over 50 years,” said an emotional Jesse after crossing the finish line. 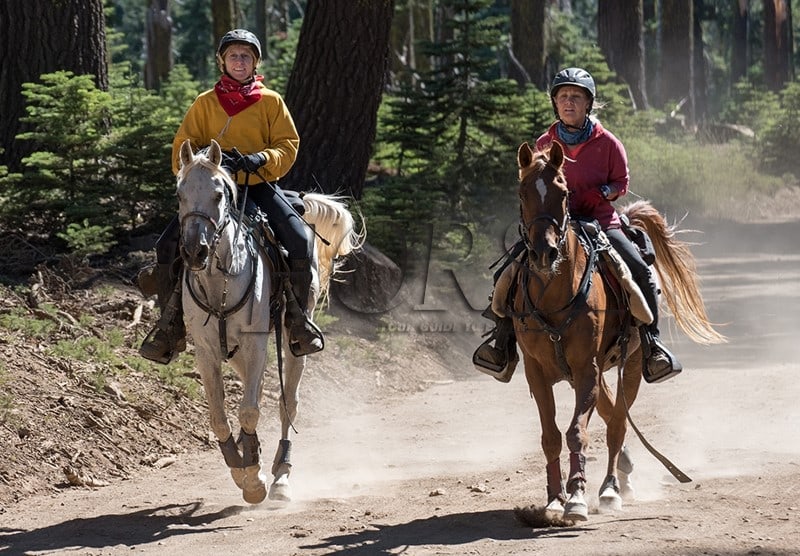 This year’s Ride also included senior horses! Of 165 starters, 6 horses, 18 or older raced including PL Mercury (Merc) 25 and his friend EH Ahmose+// (Amos) 17 from Maryland. Merc (on the left) ridden by Lisa Bykowski finished 14th last year but withdrew from this year’s race failing a final vet check just 6 miles from the finish. But Amos (on the right) and rider Clair Godwin soldiered on finishing 18th.

Lora Wereb and her 18-year-old Tennessee Walking Horse Spin Out Merlin adopted a slow and steady philosophy that worked for them. They finished the Ride within the 24-hour limit. 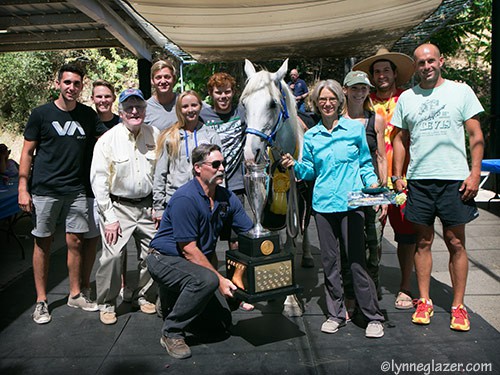 Tevis winner Dr. Karen Donley riding Royal Patron (Winnie), an Arabian mare age 14 finished in 14:33. This was their sixth Ride and first win! Congrats to all riders and finishers.

The Tevis Cup trophy is awarded to the person who completes the 100-Mile One-Day course in the shortest amount of time and whose horse is in sound condition and “fit to continue.” The Tevis Cup was named for Lloyd Tevis (1824 – 1899) by his grandson Will Tevis, a prominent San Francisco businessman and early benefactor of the Ride, and was first awarded in 1959 to Nick Mansfield, riding Buffalo Bill, an eleven-year-old TB Cross gelding.

Another major trophy, the Haggin Cup, is awarded to the rider whose horse is in the “most superior physical condition” of the first ten horses to cross the finish line. The Haggin Cup, named for James Ben Ali Haggin (1821 – 1914), was first awarded in 1964 to Paige Harper, riding his six-year-old Arabian gelding, Keno.

The Josephine Stedem Scripps Foundation Cup was established in 1994 to recognize each of the finishing Junior Riders for their special achievement. The first Junior finisher was David Jay, Jr., who completed the 3rd annual Ride in 1957.