Sooners Got A Few Small Problems

July 12, 2019, Cleveland County, Oklahoma (USA): A miniature horse slipped away from its owners but not the local police. Sheriff’s Deputy Joshua Lacy was quick to apprehend the little run away but the mini wasn’t talking and couldn’t be left free to roam the roads. What to do? What to do?

Lacy’s regular patrol car was in the shop that day and he happened to be driving the K-9 patrol car which has more room in the back. The mini hopped into the back of the car and was given a ride home.

This isn’t the first time Oklahoma Officials have been tasked with giving small horses or in this case, a small donkey a lift. In December 2015, a donkey was found wandering the roads in Norman, Oklahoma. A good samaritan called police, helped catch the donkey then offered to keep him until it’s owners were located. Unfortunately her home was four miles away. There was only one option. The two coaxed the donkey into the back of the patrol car. The following day, the donkey’s owners came forward and returned him home. 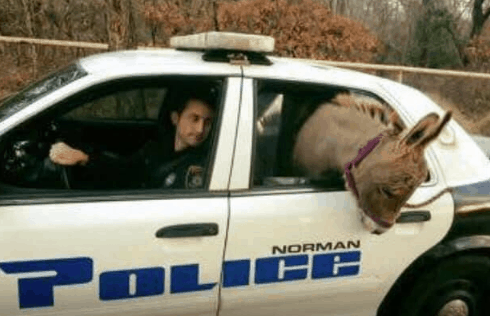 Where there’s a will there’s a way. We can all be grateful to the officers whose imaginative solutions likely saved these mini mischief maker’s lives.

Note to Oklahoma criminals. If you are arrested and placed in the back of a patrol car, you might want to check the bottom of your shoes when you get out. Just sayin’.

Never been? Check it out!