Faceiro is a horse who lives in Brazil. He leads a typical horse’s life; eats grass, naps in the sunshine and enjoys an occasional ride. But over the weekend, things changed for Faceiro. This unassuming “regular kind of” horse has achieved a certain level of notoriety after being arrested. 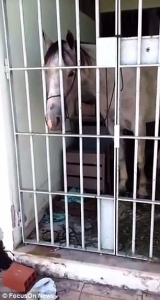 Faceiro was being ridden by a friend of his owner when he startled and kicked out damaging a woman’s car. The police were called and Faceiro arrested, accused of causing criminal damage. The horse, not his rider, was hauled to the local police station where he was incarcerated in one of the jail cells, people jail cells.

Faciero’s owner was summoned to the station and found his horse nearly immobile in the tight space without food or water. He was released the following day but only after his owner agreed to cover the repair bill for the damaged vehicle.

Local reporters asked the police chief if it was customary to arrest a horse for a traffic offense. He responded “no” and has launched an investigation to “determine what happened”. Faciero’s owner reported the police actions against his horse to local animal welfare groups.