July 20, 2019 Turlock, California (USA): A sheriff’s horse was punched and four police officers injured during an altercation at the Stanislaus County Fair over the weekend. According to officials, a fight broke out after one of the beer booths closed 45 minutes early. The mounted patrol quickly moved in to surround the group and create a barrier to insulate the situation. One of the brawling men was knocked over by a sheriff’s horse. Upon realizing his beer spilled, he punched the horse, Maximus, in the butt and was arrested. In all five people were arrested, one deputy suffered a dislocated shoulder and four others minor injuries.

On Monday, the Stanislaus County Sheriff’s Department posted an update on Facebook, “Maximus is still committed to serving justice and will not be dissuaded in his efforts. The Deputies are doing fine also.”

The Time the Tables Turned 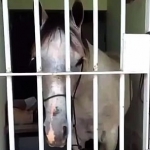 What happens when you strike a police horse? That’s right, YOU GO TO JAIL. But what happens on the rare occasion that the tables are turned?