Britain’s oldest surviving breed tilled the soil that fed a nation for centuries. Times have changed, today the critically endangered Suffolk Punch is looking for new purpose as it struggles to survive. One particular Punch has taken up a new job receiving eye popping reactions from the other participants.

Craikhow Hall Jensen is a nine-year-old Suffolk Punch stallion. His only occupation has been to serve as stud, at least until Bruce Langley McKim purchased him last year. McKim owns several endangered draft stallions. He does not believe in keeping stallions stalled instead he believes that each needs a job beyond breeding. Working with Jenson, McKim was riding him within three days. He was ‘easy as pie to break’. Ground poles were introduced to build confidence and Jensen quickly learned to jump. In February, McKim and Jensen made their debut at a local hunt in Illston.

“He was good as gold,” said McKim. “People were gobsmacked and the social media was huge. I think there was astonishment that you could take a horse like that out and he could be nimble enough to jump.”

The meet at Illston was the stallion’s first hunt, the first time ridden in public and the first time hanging out with a pack of hounds. It will not be his last.

“What I am doing with him isn’t what they were designed for, but that job doesn’t exist anymore. I’m not looking to change the breed, but I think they have to diversify.” 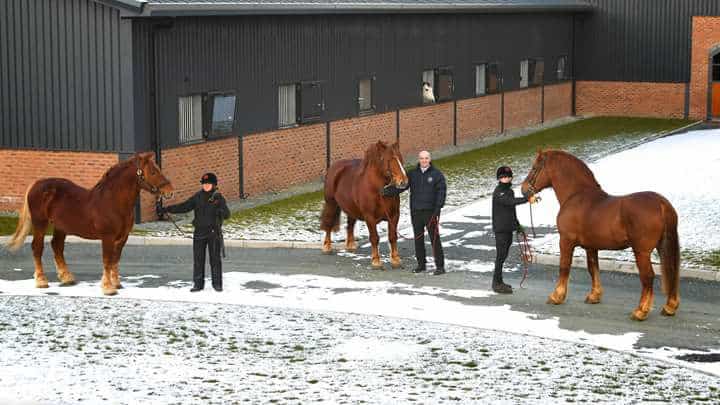 Last week Jensen and two other Suffolk Punch stallions arrived at Stallion AI Services for semen collection. The trio were selected by the Suffolk Punch Trust to contribute to the Rare Breeds Bank. When he returns home, you may spot Jenson once again galloping with the hunt and jumping hedges to beat the band.

Below is a list of horse breeds native to the UK. Our hats off to the dedicated people working for their survival. Statistics courtesy Stallion AI Services.

Don’t miss WARHorses’ earlier post profiling Clare, Countess of Euston, and her work to save the Suffolk Punch.

All Suffolk Punch horses can be traced to a single stallion owned by Thomas Crisp of Ufford, Suffolk. The horse was never named and is simply referred to as Crisp’s Horse, foaled in 1768.

A Suffolk Punch weighs approximately one ton (2,030lb) or double the weight of an average horse