It was moving day for Moonshine, a 15-year-old Appaloosa gelding, owned by 18-year-old Amanda Thorson. The plan was to trailer Moonshine a short distance down the road to a new barn. But Moonshine would have none of it, refusing to load. 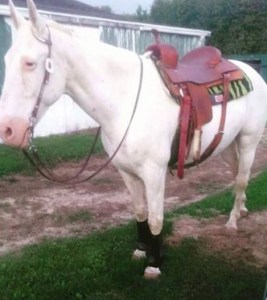 Pastor Leonard Barney had tried to unload a riding mower from the back of his truck when it fell and pinned him to the ground. Unable to move for nearly an hour, he laid on the ground “just praying to God to send help.”

And along came Moonshine. The girls were able to lift the lawn mower and call 911. Once freed the Pastor expressed his gratitude to the girls and Moonshine.

“Bless your horse, because if it weren’t for you guys, I’d still he here,” he said.

Amanda credits her horse for alerting them to the man’s need. Pastor Barney spent several days in the hospital suffering puncture wounds and several fractures.

“It was just amazing how God worked the whole situation out, and we have been laughing, though, since we found out what happened. Moonshine saved the pastor, what a sense of humor God has,” said Melissa Barney, Pastor Barney’s daughter-in-law.