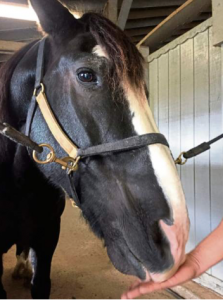 Pittsburgh, Pennsylvania was looking for ways to cut their budget in 2003. Terminating the nearly century year old mounted police unit was just one of many difficult decisions made that year. This spring the city announced that they were looking at ways to bring the mounted unit back.

An officer was taking private riding lessons on Guinness when his owner offered to sell him for the unit. A local company donated the funds and the deal was done.

The city plans to purchase six horses, their acquisition financed by local businesses and non-profits. The ideal candidates are draft/part draft geldings between 5 and 10 years old. One would think there are plenty of horses from which to choose but in actuality the city is struggling to identify candidates.

“We’re looking for a horse that if a little kid runs up to pet it and smacks it, it’s not going to react,” said police Cmdr. Ed Trapp, who heads the mounted unit.

Four full and four part-time officers will be assigned to the mounted patrol. The horses will patrol neighborhoods, special events and be active stewards for community relations.