Its Good to be King – King Tut

Mounted Patrols work for some communities while others find the units cost prohibitive and relatively ineffective. For decades, horses have patrolled the crowds at the Saratoga Performing Arts Center, New York. Phil Collins performed there in 1994 under the unit’s watchful eye. Sadly, as Phil’s lyrics go – the mounted patrol “…won’t be there no more, no more…” This summer was the last for SPA State Park’s mounted patrol. King Tut and Manny, the park’s two remaining police horses, will be retired.

King Tut, a Clydesdale/Percheron mix, and Manny, a Standardbred, shared a stable and worked together to control crowds during popular concerts such as Phish and Dave Matthews. The mounted patrol was primarily assigned to patrol the streets in and around the Saratoga Race Track. The horses provided an “elevated view” a helpful perspective when working within large crowds. SPA was the only state park in New York with a mounted patrol, but the unit stopped purchasing horses in 2014 after determining that ATVs and bicycles served the park police as effectively and at a fraction of the cost.

Training new mounts was a considerable investment for the patrol. The department received horses from various means, thoroughbreds retired from racing or older draft horses. The horses were required to stand still for long periods of time, handle attention from patrons and remain calm around loud noises or strange smells. The horses were tested for a 4-month trial period before determined suitable to serve. Upon completion of training the horse was given a new name and started its career with the police department.

Park Officer Kory Barney said, “Sometimes it feels like the horses are falling asleep while we’re on them.” 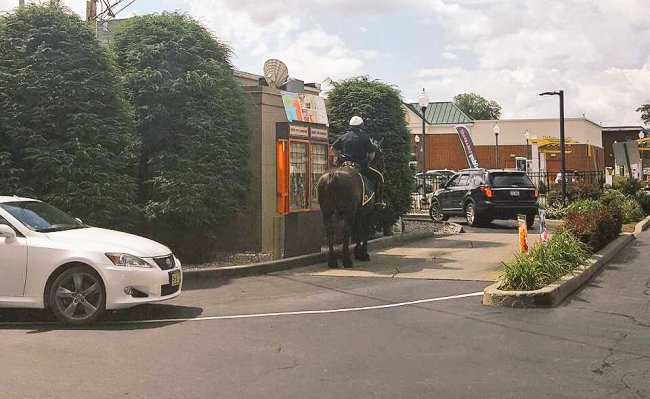 Mounted Officer John Sesselman found a way to combat those dozy moments patrolling the park. He and King Tut, were spotted at the Dunkin’ Donuts drive-thru window. Hot coffee for the officer and glazed Munchkins for King Tut were the right remedies for the morning dozies.

Happy Retirement King Tut and Manny. Thank you for your service.