The damage wrought upon Texas and Louisiana from Hurricane Harvey continues to challenge folks. The clean-up and rebuilding will go on for months perhaps years but normalcy is beginning to take foothold; children are back in school, the power is on and the water has receded. People strive to reconnect to their previous lives which includes finding their pets and horses. 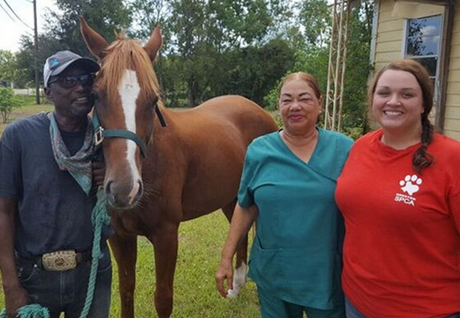 The Beard Family and Billy Jack

Gaither and Donna Beard were separated from their horse Billy Jack as their property flooded. Gaither was leading the horse to higher ground when a helicopter passed overhead. Billy Jack spooked and Gaither became tangled in the lead rope and was pulled under water. Fortunately, local deputies were close and helped Gaither out of the water but Billy Jack had disappeared.

For weeks the Beards searched for Billy Jack to no avail. They contacted the Houston SPCA who located Billy Jack in Austin. The HSPCA made arrangements for his return and donated feed. 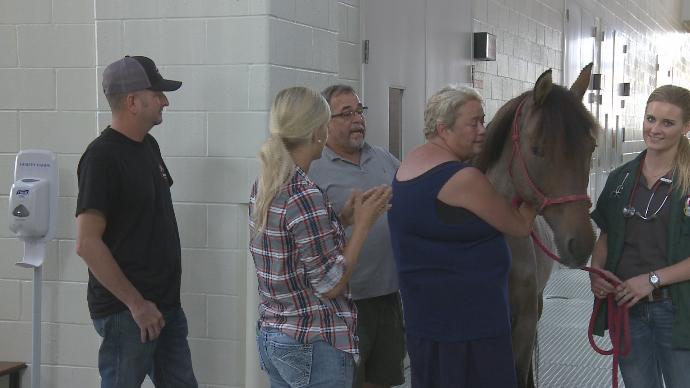 Peanut Returns to Her Family

Another horse, Peanut, was also reunited this week with his owners. Peanut had been injured in the floods following Hurricane Harvey. He has been at Texas A&M Large Animal Hospital recovering.

“The weekend that Peanut came, we had 50 other horses also come rescued from the hurricane,” explained Michelle Coleman, DVM, a Texas A&M assistant professor of Large Animal Internal Medicine. “We were able to accommodate all those horses. We had the space, the manpower the help to provide the medical needs that they required.”

You may remember this horse from the news. This mare and another were rescued by the College Station firefighters during Harvey but their owners have not been identified. Last week it was announced that the horses would go to public auction which stirred up much negative reaction from horse lovers on social media suggesting that a few weeks may not be enough time for their owners to come forward given the likelihood they lost everything in the floods. Fortune smiled again on these two survivors and a local rescue bought both horses and will keep them with the hope that their owners will one day come forward to reclaim them.

Houston’s ASPCA has reunited more than 200 pet owners including 40 horses. They continue to support animals while families rebuild, transport animals and help families secure food and short term foster care for their pets. For these reasons and many more, WARHorses donated $225 to the Houston ASPCA. This was our first GoFundMe effort and we are tickled with the result. Thank you WARHorses for your generous contributions.