Horse News in a Nutshell

There have been so many recent news posts about horses, we decided to compile them into a single post. The following WARHorses NEWS BITS range from early to mid May 2020. 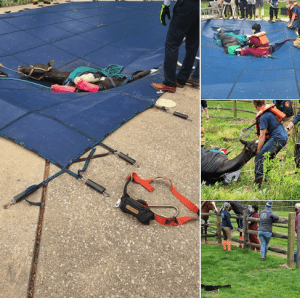 Horse Falls in Pool
Chester County, Pennsylvania (USA): A 16-year-old mare named Saphia wandered out of the barn and fell into a pool. Several fire departments including a local Large Animal Rescue Team responded to the owner’s call for help. A plan was formulated to remove the struggling horse whose leg was tangled in the pool cover. Sapphire was sedated then secured to a sled and pulled from the pool. After the sedation wore off, the mare was on her feet and doing well. (photo courtesy: Malvern Fire Company)

Intoxicated Man Stabs Horse with Pitchfork
Lemoore City , California (USA): Kings County Sheriff’s officers arrested a man for animal cruelty Monday night. The deputies were dispatched per a report of an intoxicated subject abusing his own horse with a pitchfork. Upon arrival, deputies found the 45-year-old in a corral with a horse bleeding from the mouth and suffering multiple lacerations about its torso. The horse was tied to the corral fencing unable to move its head. The wounds caused by a pitchfork which was found discarded behind the corral. The horse was taken into custody by Kings County Animal Services and will be treated for its injuries. The man was arrested on suspicion of animal cruelty and for two additional outstanding warrants. His bail was set at $89,800. 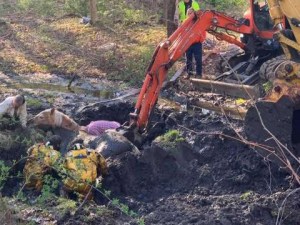 Stuck in the Mud #1
Bethlehem, Connecticut (USA): A horse named Sampson was rescued when he became stuck in a muddy pond Thursday morning. Heavy equipment was needed to extract the 2000 pound gelding. Two excavators, a heavy-duty tower and a regional rescue team worked for 2 1/2 hours to safely extract the horse. (photo courtesy: Bethlehem Fire Department)

Stuck in the Mud #2
Alberta, Calgary (CAN): A group of equestrians saved a young wild horse stuck in a muddy bog. Members of the Help Alberta Wildies Society (HAWS) were scouting for new foals near Sundre, Alberta when they discovered the filly struggling to drag herself from a frozen muddy hole. The group was able to secure ropes around the filly and gently pull her from the hole with their ATVs. Once freed, the exhausted horse chose to stand near her rescuers and graze rather than run away. One of the rescuers said, “I think she’s going to be fine.” (photo courtesy: Darrell Glover) 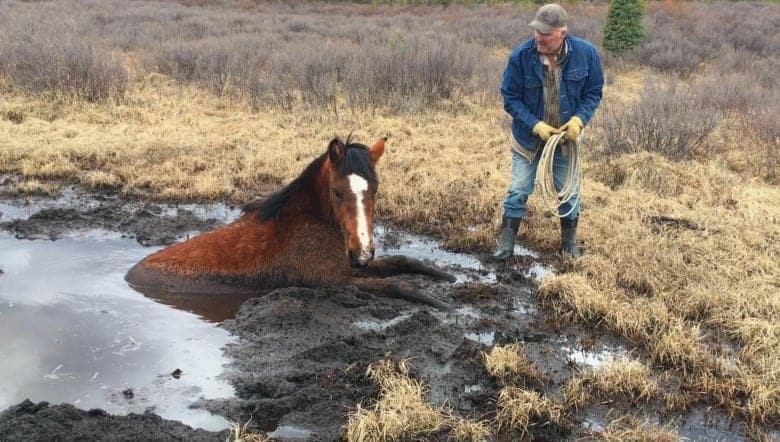 Stolen Horse Found
Throop, New York (USA): A man was arrested for stealing a horse early Thursday. The Cayuga County Sheriff’s Office followed a trail of horse manure and soon located the stolen horse tied in front a nearby home. A 55-year-old man, who had a past interest in the horse, was arrested and charged with third-degree burglary and third-degree grand larceny, both class D felonies.

Neglected Mare Dumped on Road
Brookshire, TX (USA): An emaciated mare was found dumped along the roadside in Brookshire, Texas. The mare is being cared for by the Houston SPCA. A $5000 reward is being offered for information which leads to the arrest and conviction of the person responsible for abandoning the horse. Anyone with information should contact the Brookshire Police Department at 281-375-5000. 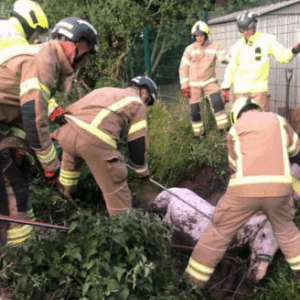 Stuck in the Mud #3
Colchester (UK): 25-year-old Duchess fell into a muddy ditch. It took firefighters 3 hours to rescue the horse sedated for her own safety. Duchess was apparently unphased by the ordeal. One of the rescue crew told reporters she was soon ‘back on her feet to go off to get her dinner.’ (photo courtesy: Essex Fire and Rescue)

Best Birthday EVER
San Antonio, Texas (USA): A horse loving girl was surprised by a parade organized to honor her 7th birthday. With many friends and family still in quarantine, the girl’s mother wanted to create a surprise her daughter would never forget. The group of riders trotted past the girl’s home singing “Happy Birthday”. (video screenshot courtesy: ksat.com) 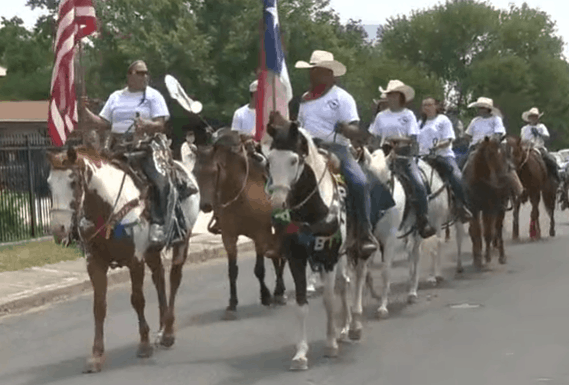 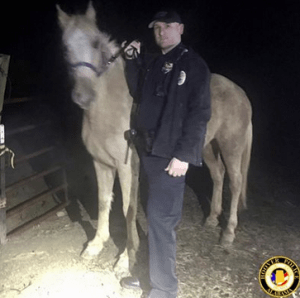 Overnight Galavant
Hoover, AL (USA): Police in Alabama found a horse out galavanting’ around in the middle of the night. The horse was found roaming on a local highway. Officers notified the surprised owner. A lead rope was secured and the horse safely walked back home. According to the PD’s Facebook page the officer’s had a bit of fun posting, “You never know what you’re gonna see on Night Shift…#NeighIfYouNeedUs #welovethisjob”. (photo courtesy: Hoover (AL) Police Department)

Horse Brings Smiles to Lonely Veterans
Beaverville, Illinois (USA): A therapy horse named Masquerade visited veterans at Good Shepherd Manor last week. Masquerade is one of three horses belonging to American Tribe Equine Therapy. The non-profit organization provides equine therapy for veterans and active duty military personnel and their families at no cost. The facilities public relations director affirmed that the men and staff enjoyed the visit telling local reporters ‘it was a big treat’ lifting the spirits of those at the group home under coronavirus-visiting restrictions. (photo courtesy: Tiffany Blanchette/Daily Journal) 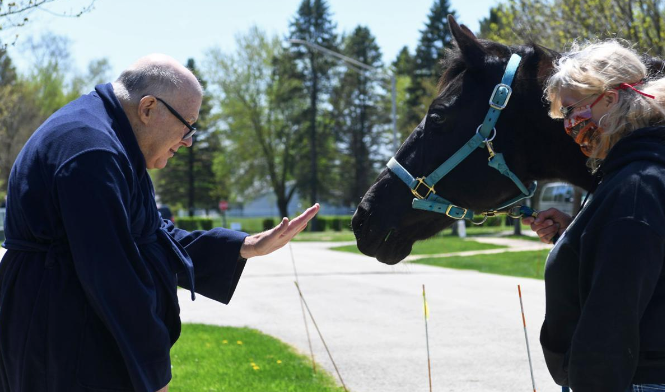 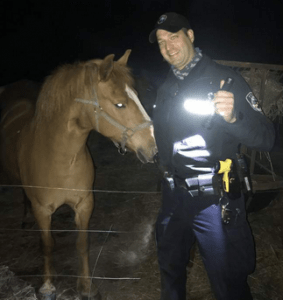