April 20, 2019 Hai’an City, Jiangsu Province (CHN): Two men in mainland China were recently stopped by police for leading a horse on city streets from a car. Traffic monitors noticed the horse on camera and dispatched police. The driver did not initially comply with officer’s attempts to stop. When the driver eventually stopped, he told police he was not at fault, it was the horse who would not stop.

The men inside the car explained that they had been riding to a friend’s who was going to care for the horse. They got tired and decided to sit in the comfort of the car and lead the horse instead. 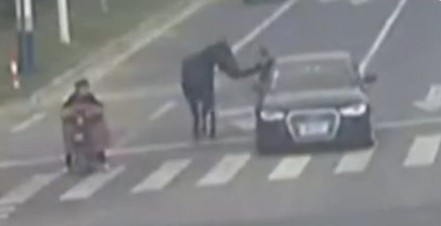 (No information available on the fate of the horse)