His New Owners Turn to the Courts for Justice

In 2017, an 8-year-old quarter horse named Shadow was surrendered to a rescue group in Oregon. A veterinary exam revealed that the horse was emaciated, covered with lice and because his penis had prolapsed and was unable to retract, his genitals were badly frostbitten. His owner was taken to court and subsequently plead guilty to criminal neglect. As part of her settlement, she paid for the horse’s immediate care. 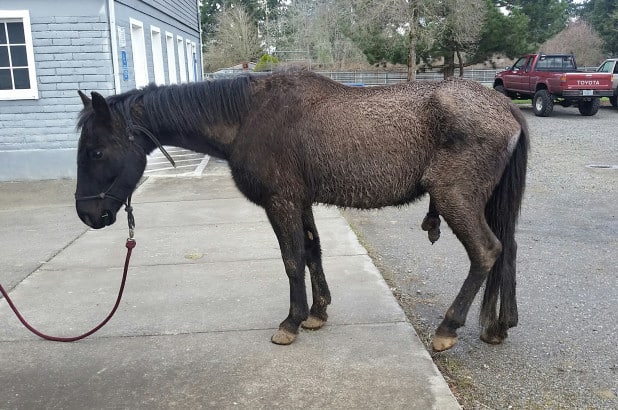 Justice’s condition when he was surrendered by his previous owner.
Photo – Animal Legal Defense Fund

In 2018, Shadow, renamed Justice, headed back to court against his former owner. His case, brought by the Animal Legal Defense Fund (ALDF) sought to secure $100,000 for extended veterinary care as well as for pain and suffering. The funds would be placed in a trust to care for Justice through his lifetime.
There have been previous attempts put forth to state courts to recognize animals as plaintiffs but judges have consistently ruled that non-humans lack legal standing to sue. However, in recent decades the courts have made significant strides toward stronger legal protection and advocacy for animals – all 50 states now have felony penalties for animal abuse. But animal rights lawyers hope to expand the laws beyond protecting animals, they aspire to give them legal standing.
ALDF lawyers believed this case might get its day in court because Oregon has fairly progressive animal protection laws. But alas no, a judge threw out the case stating “The court finds that a non-human animal such as Justice lacks the legal status or qualifications necessary for the assertion of legal rights and duties in a court of law.” The ALDF plans to appeal. 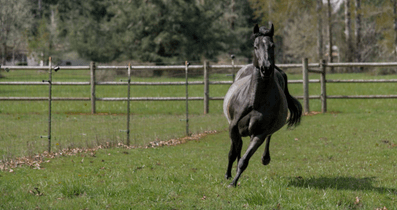 What happened to Justice?
Justice is in rehab at Sound Equine Options rescue in Oregon. He has been gelded but is still unable to fully retract his penis and faces the possibility that his penis may need to be partially amputated. His liver enzymes are elevated, the suspected cause ingestion of toxic plants, not uncommon to starving horses. The rescue hopes to find Justice a permanent home dedicated to serving his long-term needs.