Gomer Saved a Horse from the Glue Factory

Jim Nabors died in his home in Honolulu, Hawaii on November 30. Born in rural Alabama in 1930, Nabors was the youngest of three children. Sever asthma prevented him from an active childhood playing sports. Instead, he focused on performance arts – theater, band and singing. His rural upbringing provided a foundation for his most famous character – Gomer Pyle.

Jim Nabors as Gomer Pyle performing at the Sikeston Rodeo, Missouri in 1965

Nabors got his acting break while performing standup. A friend’s introductions clinched his first professional gig on The Steve Allen Show. Months later, Andy Griffith saw Nabors’ standup and asked him to audition for a role on The Andy Griffith Show and “shazzayam” he got the part.

Nabors’ rural upbringing was the impetus for his most famous character, Gomer Pyle. The character was beloved by television audiences and spun off to his own series, “Gomer Pyle: USMC” (1964-69). Nabors career spanned decades and included a number one rated situation comedy, a top ten variety show, a talk show, several television specials, a recording career, he acted in movies and regularly performed in stage productions and concerts. In the 1970’s he semi-retired to Hawaii to manage his 500-acre ranch growing macadamia nuts.

In his personal life, Nabors was not an equestrian, but his character Gomer Pyle certainly had a penchant for a good horse. On February 23, 1968 an episode of “Gomer Pyle: USMC” aired,  “Goodbye, Dolly” involved Gomer buying an old horse named Dolly to save her from the glue factor. The hijinx ensue when Gomer tries hiding Dolly on the marine base.

RIP Jim Nabors, “gawleee” we are going to miss you! 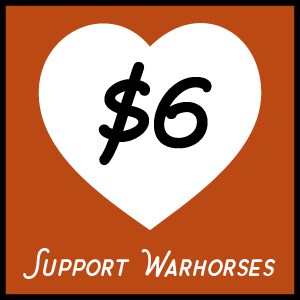 How YOUR Support Helps WARHorses

Every cent of support is invested back into our community. Funds support our ability to generate new stories and to make improvements to the website that help make those stories more engaging. WARHorses strives to be YOUR go to resource for information and inspiration. We hope you will consider supporting our community. Thank you

*WARHorses is not a non-profit organization, your support is not tax deductible, but it is greatly appreciate!