Girls Save Dad’s Life with a Lead Rope

When Colin Bailey severed his right arm trying to attach a horse trailer to the car, he thought he was a goner. His 12-year-old daughter, Ayumi and her friend, Aja, were the only one’s home. The girls heard Bailey’s cries for help and ran outside to see what was wrong.

“I saw the blood and noticed his hand wasn’t attached to his arm anymore. I had a minute of screaming,” said Aja.

Ayumi’s hands were shaking so badly she misdialed six times but eventually reached the ambulance service.

“I managed to press 000 eventually but I was also thinking this isn’t a dream, I’ve got to wake up and think,” Ayumi Bailey said.

The Bailey’s live in a rural area near Moonbah in the NSW Snowy Mountains. The ambulance arrived within 20 minutes and paramedics credit the two young girls with saving Bailey’s life.

On February 26th, the girls were among 15 others awarded the Pride of Australia Medal at the Sydney Opera House. The award honors ordinary Australians for extraordinary acts of bravery, service and charity. 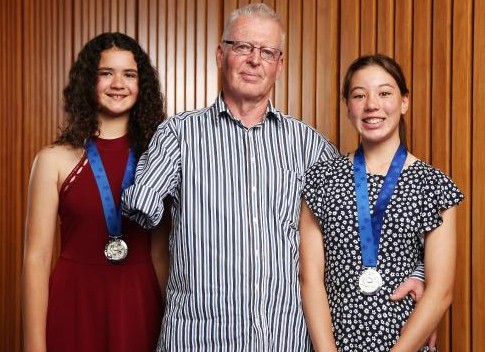 Colin Bailey with daughter, Ayumi (r) and her friend Aja with their Pride of Australia Medals. Photo courtesy: Tim Hunter