Everybody Loves Raymond the Mule

Folks familiar with the wild horses of North Carolina’s Outer Banks are over the moon. Raymond, the last mule living among the coastal herds and renowned local celebrity is back!
Raymond was struggling last year, having lost all his mares, unable to keep up with them because his feet were badly overgrown. Specialists with the Corolla Wild Horse Fund (the organization that oversees and cares for the horses) trimmed off his grossly long hooves. Afterward, he disappeared into the island marsh and no one saw him again. He was presumed dead.
But Raymond the mule was too stubborn for that. He recently re-emerged on the beach with his own herd of three mares. Mules are sterile but no one has told that to Raymond.

“…And we’re not going to tell him,” says herd manager Meg Puckett. “He challenged a much younger stallion for those mares and he won. That’s saying a lot.” 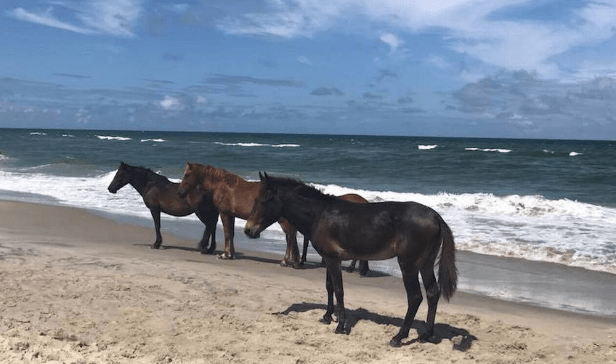 Raymond is a beloved character among residents and vacationers – his return being celebrated on social media with personal anecdotes. One resident recalled the time Raymond chased her out of her own backyard and cornered her in an outdoor shower. Another fan wrote she was happy to see Raymond and his girls for herself, at the time Raymond had a bird sitting on his back.
The wild horses are thought to be descendants of horses brought to the Outer Banks 400 years ago by early explorers. Later, mules infiltrated the herds turned loose or escaped from local farms. Raymond, who is approximately 20 years old,  is the last remaining mule, a historic icon indeed.

During last fall’s hurricane season, many worried whether the Corolla Island wild horses would survive the wrath of category 4, Hurricane Florence. Much of the island did not fare well, but the horses did just fine including the resident horse cousin, Raymond the mule.

2019 finds Raymond reigning over his herd of 3 mares. Though he is smaller than they and infertile, he conducts himself like a stallion protecting and defending his mares with all his might. Yes, sometimes he loses a mare to another stallion, but he eventually wins her back. And when the mare’s give birth, he adopts the foals as though they were his own. 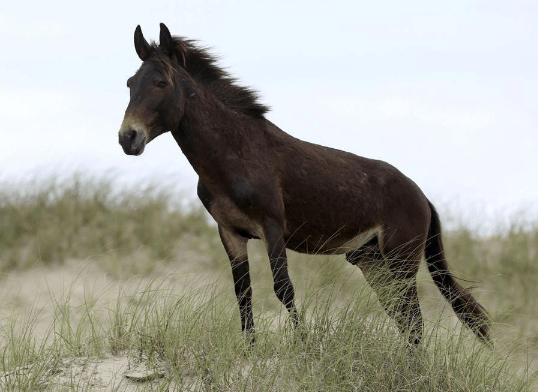 The herd’s human caretakers are particularly pleased with Raymond’s health this year. He has fully recovered from last year’s hoof trimming surgery. Though he is 20, the average age for mules is 30 to 50 so no one expects Raymond to go anywhere any time soon. And there’s absolutely no reason why he should.

So if you’re visiting Corolla Island this season and hear loud roaring as though Godzilla himself were walking on shore, don’t worry. Its just Raymond braying to all within earshot.