March 13, 2019 Rush, Colorado (USA): There are certain weather events that defy preparation. You are simply left to deal with it the best you are able. Wednesday’s Bomb Cyclone paralyzed parts of the central US with hurricane strength winds and drifting snow. A bomb cyclone is a meteorological term for a storm that intensifies quickly a process called “bombogenesis” in which the barometric pressure falls by at least 24 millibars over 24 hours. On Tuesday, Coloradans were enjoying a sunny day with temps near 60. By Wednesday the temperature dropped more than 40 degrees as storm winds reached nearly 100 mph creating massive snow drifts and causing extensive structural damage.

Carrie Terroux-Barrett runs C Lazy T Performance Horses near Rush, Colorado and hosts horses for The Colorado Horse Rescue Network. Carrie and her husband, Pete, prepared as best they could for the storm, securing their horses inside with blankets. However during the height of the storm, the winds blew open a barn door and one of the horses wandered outside. 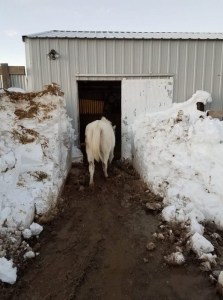 Bernadette, a 20 something arab mare had only recently arrived at the ranch, a sheriff’s surrender. Once outside, Bernadette was soon stuck in deep snow. Unable to move, encased inside her frozen blanket, it took Carrie and Pete three hours to dig her out during the height of the storm. Thankfully, Bernadette was freed, returned to the barn and days later seems unaffected by her ordeal.