Did She Shoot the Man Shooting Wild Horses

On May 2, an amateur photographer was taking photos of wild horses at the Apache Sitgreaves National Forest near Heber/Overgaard, Arizona (USA) when gunshots rang out.

“I saw the horses get startled and I was startled,” said Kathie Reidhead who took cover behind a fallen tree.

Reidhead watched a man take four or five shots at one of the horses then turned his attention to another group. Reidhead stood up at which point the man lowered his rifle. As she approached the man put his rifle away and began picking up the shell casings.

When she asked what he was doing, the man said that he was shooting a new gun and was unaware that she was nearby. Reidhead called 911. A Navajo County Sheriff’s deputy arrived examining the area with Reidhead for evidence of blood to suggest one of the horses had been hit. None was found. Upon speaking with the shooter, the deputy documented the man’s claim that he was aiming at a tree stump, not the horses. Soon after recording the incident, the county closed the case stating there was no evidence of criminal activity.

“I think a guy with that type of weapon, if he wanted to shoot the horses, he could’ve done it. But he didn’t, and that’s just the thing,” said Sheriff David Clouse when asked about the department’s conclusion.

Since October 2018 there have been 19 wild horse deaths in Heber, 11 of the horses were shot though 6 were so badly decomposed that a cause of death was impossible to determine. The horses are managed by the U.S. Forest Service not the Bureau of Land Management. There is an open investigation, coordinated between the Forest Service and Navajo County Sheriff’s Department, to identify and charge the person or persons responsible for the shootings.

“The Apache-Sitgreaves National Forest considers each horse to be special, and any senseless cruelty to animals on public lands is sad and disheartening,” said a recent U.S. Forest Service statement.

It is also a violate of federal law, specifically the Wild and Free-Roaming Horses and Burros Act of 1971 (WFRHBA). The act provides specific protections to “all unbranded and unclaimed horses and burros on public lands of the United States”, and makes it a crime for anyone to harass or kill these animals on public land. Additionally, the state of Arizona protects the animals via the Arizona Cruelty to Animals law which makes shooting or causing a horse suffering a criminal offense. 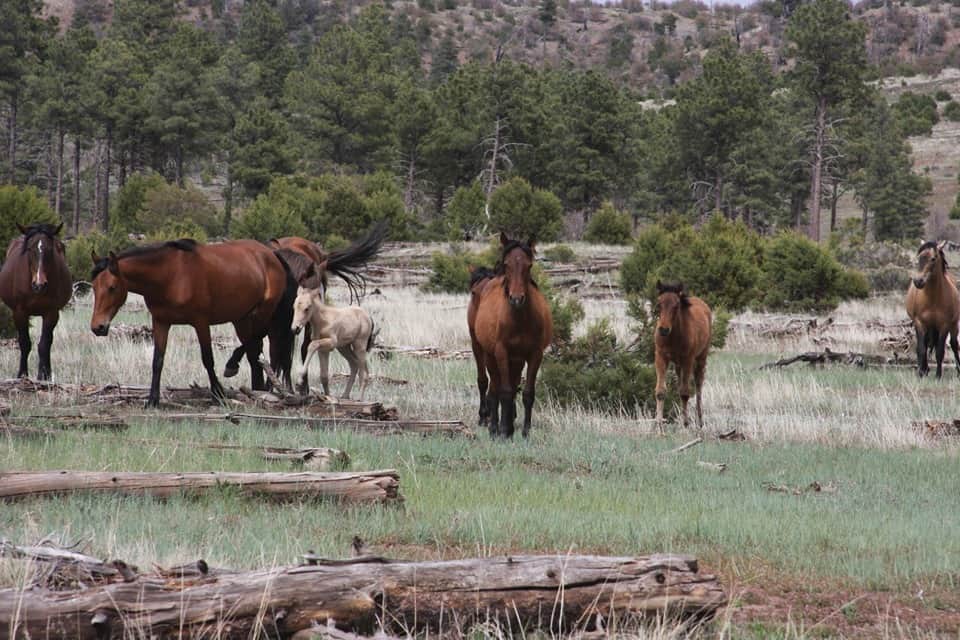 Reidhead has more than 166 photos and 6 videos documenting the incident and has contact the Forest Service offering information. They have not replied as they don’t consider it relevant since the sheriff department closed the case.

“Its great that we have a law protecting these horses, but what good is a law if its not being enforced?” questioned Reidhead.