Today’s big news in Florida is certainly Hurricane Michael as it churns up the Florida coast. Last week there was interesting news of a horsey perspective from St. Augustine. While excavating for a hotel swimming pool, construction crews unearthed a horse skeleton near the site of the city’s first church.

“We estimate this horse to date between 1680 – 1700,” St. Augustine Archaeologist Carl Halbirt says. “So, it’s roughly 330 years old. It makes it one of the oldest horse burials on the U.S.”

Halbirt estimated the horse was about 40 inches from its hooves to its shoulder, so it maybe a donkey or a small horse perhaps an ancestor to the Marsh Tacky breed.

Founded 1565, by the Spanish, St. Augustine is oldest city in the United States. The city embraces its rich archeological heritage buried beneath modern buildings, streets and backyards. The Archaeological Preservation Ordinance requires all construction be monitored by an authorized archeologist. Few municipalities provide this precaution but it has proved a fruitful endeavor for St. Augustine which unearths an average of 30 archeological investigations each year.

Nuestra Senora de la Soledad was a church built by Spanish colonist in 1572. In 1597 a hospital was added making it the first hospital in the United States. When Spain ceded Florida to the British in 1763, the facility remained in use for another 20 years. But when the Spanish returned in 1784 the buildings were dismantled and the stone used to build the Cathedral Basilica in 1793, that exists today. Halbirt speculates the horse may have been used by the people who managed or ministered la Soledad. 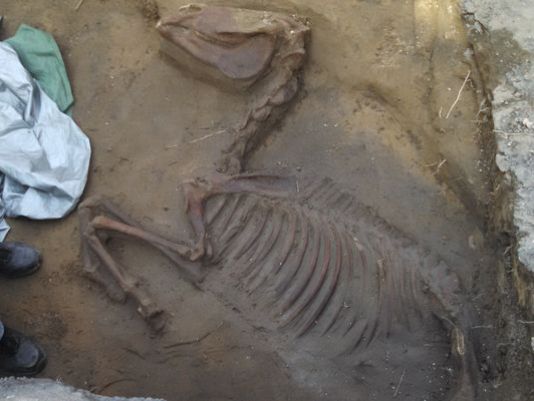 In 2015 another small horse skeleton was discovered during construction of a restaurant. 200 years earlier the location was the site of the Spanish Dragoon Barracks. The dragoons were colonial cavalry experts whose purpose was to serve as messengers, guides and spies. Their horses were petite and fast, and capable of travel across the sand and wetlands of Florida. Archeologists suspect the horse was part of the cavalry.

“I think there’s reverence here,” Halbirt said. “They actually laid it out on its side with the legs folded in the chest area. That’s a sign of reverence.”