There’s lots to celebrate at the Dallas Zoo! Not one but two rare Somalia Wild Ass foals were born in July. Kalila (“dearly loved” in Arabic) was born to Liberty on July 9 and Naima (“calm” in Arabic) born to Hani July 19. Abai their sire arrived at the Dallas Zoo in 2005 on loan from the Basel Zoo in Switzerland. 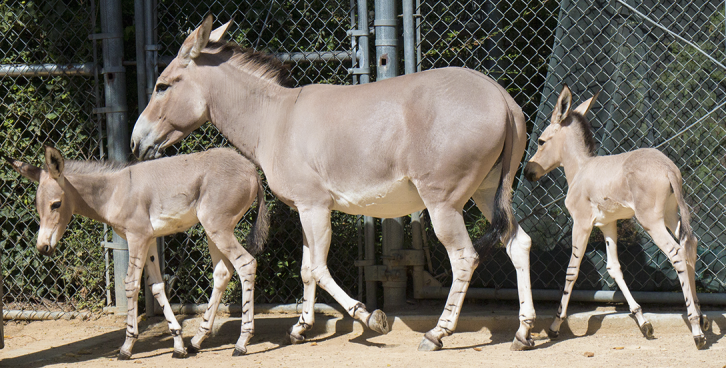 The thriving foals were recently introduced to one another under the watchful eyes of their protective mothers. Their days are spent kicking up their heels and tossing about a whole lot of attitude. Currently off exhibit, they will soon be introduced into the Wilds of Africa habitat joining addax, ostriches and gemsbok.

“This is a big moment for our hoof stock team. Somali Wild Asses are critically endangered, with less than 600 left in the wild,” mammal curator John Fried said. “Only nine institutions in the U.S. care for this rare species, and to be able to welcome two babies is truly one of the highlights of my career.”

The Dallas Zoo is one of approximately 50 around the world working to increase the population of captive Asses. The genetic base is narrow, all 260 animals registered in the 2016 studbook are traced to 17 founding animals established in the early 1970s. In 1986, the San Diego Zoo was the first zoo to realize the birth of a foal in the Western Hemisphere and holds the largest number of Asses in North America today. 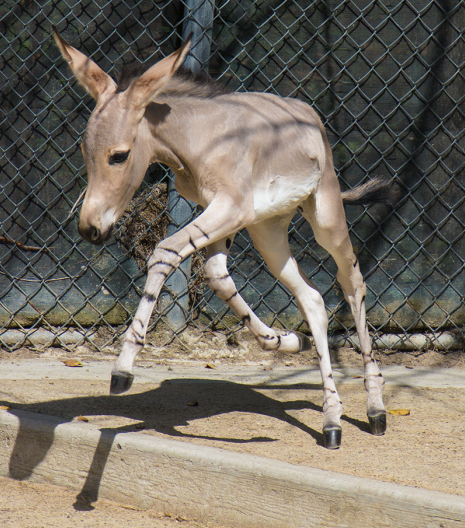 In the wild Somali Wild Asses eek out a living in the arid, rocky regions of Somalia, Ethiopia and Eritrea. The species has a long history dating back thousands of years. Their images were painted by ancient people in caves across North Africa. They were once coveted by sultans who would chop off the hand of any man who dared kill one. More recently they have been hunted to near extinction for their meat and fat which is culturally considered a cure for hepatitis. Political unrest in the region also mitigates habitat.

Human impact is not the only factor to the decline of the species. Global warming has affected forage and access to water holes. Interbreeding with domestic asses further threatens the genetic pool. Somali Wild Asses are considered critically endangered.

Which gives cause to celebrate these two remarkable births at the Dallas Zoo. Congratulations!

Did you know the Suffolk Punch is also an endangered breed? Read WARHorses’ post about efforts to save Britain’s oldest native breed!