There’s a war, of sorts, brewing over the roundabouts in Norfolk, England. The battle centers around a large Warhorse sculpture and the safety of passing traffic.

Artist Damian O’Connor built the 10-foot-tall, one ton Warhorse of steel, wood and Norfolk reeds. In the wee hours of the morning, O’Connor trailers the giant horse to various Norfolk roundabouts, his intent to excite passersby.

“I’ve had a lot of feedback which has been very positive,” said O’Connor. 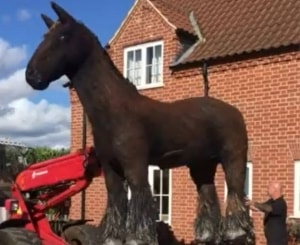 But a letter from the Norfolk County Council (NCC) proclaimed the large horse an obstruction, a road hazard and ordered it removed or legal action would ensue.

O’Connor responded, “horse shit.” He expounded by questioning how the NCC responds to damage and injury claims from drivers distracted by paid advertising placed in the center of roundabouts.

Ball back in the court of the NCC which issued a subsequent statement reinforcing their concern for public safety and the immediate removal of the Warhorse.