February 27, New York, NY (USA): Detective John Reilly and his partner Trooper are the only mounted officers assigned to patrol Central Park in New York City. Last week both officers retired. Detective Reilly “aged out” when he turned 63, the mandatory retirement age for members of the New York City Police Department. Trooper, 15, has worked for 10 years, the typical limit for a city police horse. 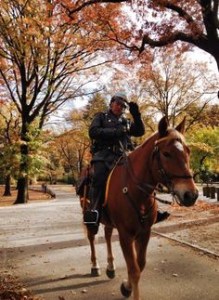 Detective Reilly and Trooper have patrolled Central Park year round Sunday through Thursday regardless of the weather for ten years. Their presence services as both a crime deterrent and makes park visitors feel safer. Over the years many locals have formed friendships with the patrolling pair. While tourists seek their assistance with directions or simply wish to snap their photo.

“Trooper’s well loved around the neighborhood,” Reilly said proudly. “People wait for him to come up West End Avenue, hearing his ‘clip clops’ in the morning.” Reilly described Trooper as smart, perceptive and a goofball who loves jelly beans.

The city does not plan to assign another dedicated team to Central Park, instead patrolling will be shared among several mounted officers. Formed in 1858, the unit has 55 horses and 100 members comprised of both officers and civilians.