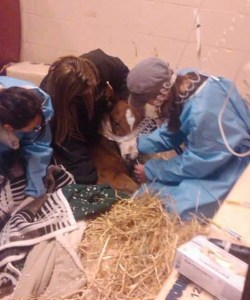 Tough Sunday never had it easy, not from day one. He was born with “dumb foal syndrome”, deprived of oxygen during birth, he was born blind and deaf.  His first week of life was spent at the veterinary hospital. Tough Sunday showed little improvement. Owner/breeder, Nick Alexander walked down to the stall to contemplate his difficult decision. Remarkably, the colt was looking right at him, tracking his movement. Tough Sunday’s sight was miraculously restored however, he was still deaf.

Alexander returned with the mare and colt and turned them out with others. “Bruiser”, as he is affectionately called around the barn, behaved like the foals.  When he was old enough Alexander sent him to the track with the other horses. Tough Sunday did not disappoint at the track placing third, then second and on his third go, he broke his maiden as a 2-year-old.

“What a cool horse. He pretty much did all the work today, Talamo said. “I just put him in the race.”

Tough Sunday has been a favorite of mine since I heard his backstory. I’ve always followed him and never stopped believing that he had this in him. What a great race!

Tough Sunday is such an incredible spirit from the day of his birth he was tested and defeated every challenge he faced. Can’t help but love this horse.