Secretariat​s track record time of 1:59 2/5 in the 1973 Kentucky Derby stands as the fastest in the history and is a feat yet to be replicated in any running since. Now, 45 years later, Secretariat has once again made history, with 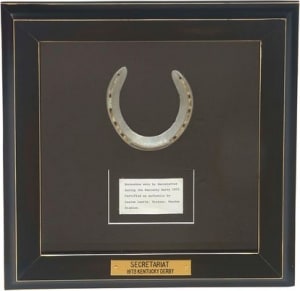 one of his race-worn shoes from the legendary race selling for a world-record $80,736 in the Lelands Invitational sports memorabilia auction, August 18 and 19.

In recent years, several auctions have featured Secretariat memorabilia including another horseshoe that sold for $37,000, one of Big Red’s victory blankets auctioned for $88,810 and a shoe nail that went for $6,100.