The Secretariat’s Vox Populi Award, recognizes a Thoroughbred that has achieved both an impressive racing record but is also popular with the public. Created in 2010 by Secretariat’s late owner, Penny Chenery, the annual “Voice of the People” award honors horses whose stories draw people to Thoroughbred racing.

The 2017 Secretariat Vox Populi Award recipient is the late Ben’s Cat. The four-time Maryland Horse of the Year received the honor after garnering a record-breaking number of votes. During Ben’s Cat’s eight-year career, which included three races in 2017, he finished in the money 48 of his 63 starts, earned $2.6 million and enjoyed an enthusiastic international fan base.

Hall of Fame trainer King Leatherbury, 84, bred, owned and trained Ben’s Cat. The dark bay gelding of modest breeding suffered a broken pelvis as a 2-year-old and did not race until he was 4. In 2010, he started at Pimlico Race Course winning a $16,000 maiden claiming race. He continued winning on turf and dirt accumulating 26 stakes victories. He died in 2017 a few weeks after his retirement following complications from colic surgery.

Leatherbury said after Ben’s Cat’s last race, “Most stars, they come along and burn out after a few years. But he kept going.”

Ben’s Cat was one of a select group of nominees submitted by the Vox Populi committee. The winner is then chosen by public votes through an online poll hosted on the Award’s website in late November through early December. Previous winners include; California Chrome, American Pharoah, Mucho Macho Man, Paynter, Rapid Redux and Zenyatta who was recipient of the inaugural award in 2010.

“It is quite an honor for Ben’s Cat to receive this impressive award,” Leatherbury said. “I never would have guessed his fan base reached that far. Ben’s Cat won a lot of races, and I sure did enjoy racing him. This is really something.” 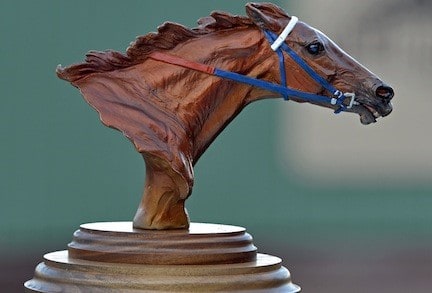 The Tweedy family will present the Vox Populi trophy to Leatherbury January 20 at Santa Anita Park. The event is open to the public.

Patch, the one-eyed race horse, was a nominee for this year’s Secretariat Vox Populi Award. Read WARHorses’ earlier post as Patch prepared to run in the Kentucky Derby.