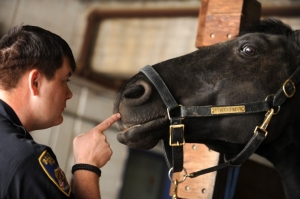 Slurpee, a 17-year-old member of Baltimore’s mounted patrol unit was retired earlier this year after 10 years of service to the city. He was donated by 7-Eleven who raised funds to purchase and train the horse. This week 7-Eleven stepped up again donating Slurpee’s replacement, Slurpee.

New Slurpee is a 4-year-old, part draft who even looks a bit like the original Slurpee. He has already passed his training and was officially initiated into the mounted patrol unit October 4th. Like his predecessor, Slurpee will serve as a four-legged ambassador of safety for the citizens of Baltimore.

Baltimore has the oldest continuously run mounted patrol unit in the United States begun in 1888. The unit is building a new stable with an adjacent museum to showcase the history of horses in police work. Once completed visitors will be able to tour the museum and visit the horses in the stable.