A bronze sculpture of jockey Julie Krone, the first woman elected to the National Museum of Racing and Hall of Fame, has been gifted to the museum by Krone, artist Linda Stinson and her husband, Michael. 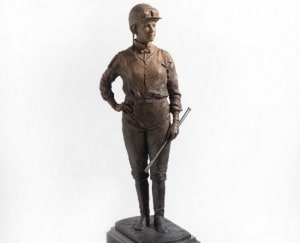 In 2000, Krone became the first woman inducted into the Hall of Fame. From 1981 to 2004, Krone won 3704 races and had purse earnings of $90.1 million. She was the first woman to win a Triple Crown race, the Belmont, in 1993 riding Colonial Affair. She was also the first to win a Breeder’s Cup race, the Juvenile Fillies in 2003 riding Halfbridled.
Stinson, earned a Masters’ Degree in Art from the University of Dallas. Retired after 20 years in advertising, she took up sculpting. Stinson worked on Krone’s likeness for two years. The finished bronze was unveiled in a private ceremony with Krone and Stinson in attendance on July 18. Currently displayed in the Museum’s Sculpture Gallery, the statue is now part of the museum’s permanent collection. 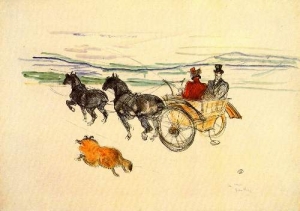