Fort Sill, Oklahoma (USA) February 5, 2019: Several hundred soldiers and family members gathered February 5 as two unit members received promotions at Fort Sill, Oklahoma. Big Deuce VII and Short Round VI were promoted to staff sergeant and specialist respectively. Everyone on hand agreed the promotions were well deserved after all neither had ever bit or kicked another soldier.

Granted most soldiers are promoted for reasons other than for not biting and kicking , but considering that Big Deuce is a donkey and Short Round, a goat, those are reason enough. Both animals serve the role of unit mascot, a long held military tradition. In the 1950’s the acting commander had the idea of a donkey mascot. The first Big Deuce came from New Mexico and cost the unit $42 including transportation to the base.

When the current Big Deuce assumed the role of mascot, he posed a challenge to his handler, Specialist Stephen Gran.

“When we first got him, he was difficult to control because he had never been on a lead rope. We had to train him up to being on a lead rope and everything like that. He’s a lot better than when I first got here,” said Gran.

Now 5 years old, Big Deuce’s recent promotion is based on his good behavior but there still exists a stubborn streak. When he tires of work, he refuses to move until he’s good and ready. 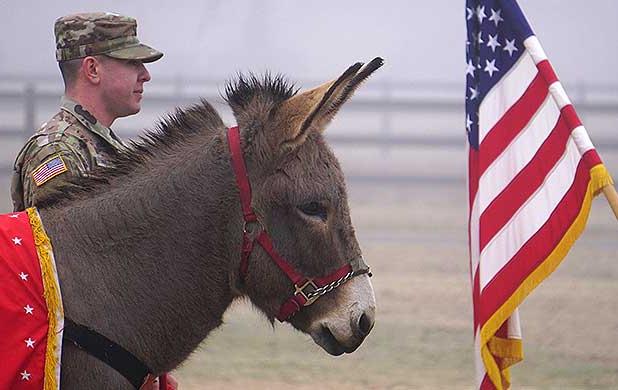 The mascot’s roles are to participate in ceremonies and parades providing the soldier’s with a sense of pride. Such was the case in 2018 when Big Deuce and Short Round led the parade of champions into the stadium during the University of Oklahoma v. U.S. Military Academy football game.

Big Deuce and Short Round are the only battalion-level live mascots in the Army, however the 1st Theater Sustainment Command at Fort Knox, Kentucky and West Point also have animal mascots; Cpl. John “Huck” Blackjack, a pony mule and three mules named Stryker, Ranger III and Paladin respectively.

About the 2nd Field Artillery Regiment

Officially designated in 1907, the unit is one of the oldest in the United States Army dating to the period between the Spanish-American War and WW1. Since 1946, the 2nd Field Artillery specializes in training field artillerymen.