All the Queen’s Horses – a Week of Indulgence

Surely the Queen’s cup runneth over when it comes to horses, particularly this week. In a seven-day window the Queen has indulged in horses as she celebrated Trooping the Colours last Saturday, a hack through the grounds at Windsor Castle on Monday and is spending Tuesday through Saturday afternoons at the Ascot Racecourse. It really is good to be the Queen! 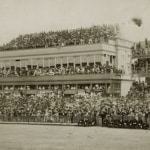 The Ascot Racecourse was founded by Queen Anne in 1711. In 1813 Parliament passed a law to ensure the grounds would remain a public racecourse. In 1839 a grandstand was built and in 1913 the Asco Authority was established to manage the facility.

It is one of Britain’s grandest social events with the Royal Family arriving each day at 2 in horse-drawn carriages (a tradition introduced in 1825 by King George IV). More than 300,000 people will attend, properly coiffed (there is a strict dress code, millinery finery exempt) and ready to hob nob (party). Attendees will consume more than 51,000 bottles of Champaign, 42,000 bottles of wine, 131,000 pints of beer, eat 10,000 steaks and 30,000 chocolate éclairs.