He was employed by the Tempe Arizona police department barely a year then fell ill. In 2016, Office Moose was retired to the care of Carrie Singer and the Animal Guardian Network Healing Ranch and Farm Sanctuary. The 10-year-old horse’s health remains tenuous despite everyone’s best efforts. He exhibits unusual symptoms that baffle his veterinarians. 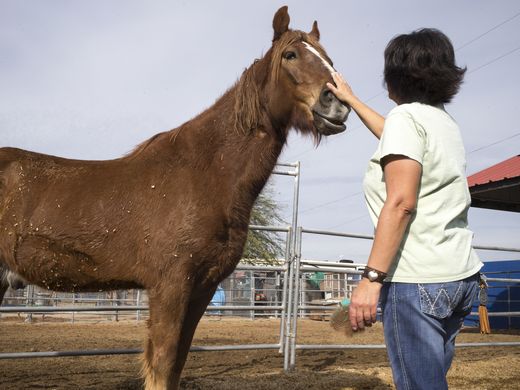 Officer Moose seems to have a neurological condition, he walks slowly, is challenged with coordination, has little energy and is depressed. His symptoms will become worse then cycle back to a more moderate stage. But even on a particularly listless day, he enjoys standing along the fence watching people and passing cars, perhaps reminiscing about his former days patrolling the community.

His caregivers want to provide a better retirement for Officer Moose and are raising funds for additional medical evaluations with the hope of identifying a source and solution. A fundraiser will be held March 4 at a local restaurant, businesses like Home Depot, have donated items to be auctioned with proceeds going to Officer Moose’s care.

“He is very ill and needs the support of animal lovers so he not only can survive but live the peaceful life he deserves,” said Carrie.

WARHorses will make a donation for Officer Moose on behalf of our community. We’ve written several stories about police horses and support the work of public servants like Officer Moose.

If you are interested in making a donation you may do so online at: www.animalguardiannetwork.org or mail a donation to Animal Guardian Network 4815 E. Carefree Hwy., Ste. 108-504 Cave Creek, AZ 85331.