Valentine, a 6-year-old pack horse, fell ill during the fall hunting season at Bridger-Teton National Forest and was left behind by the outfitter company.

Weeks later the mare was spotted by a trail groomer clearing snow. The dark-coated mare stood out against a blanket of deep white snow. She was gaunt pawing down snow drifts, nibbling any grass she could find. The trail groomer contacted the Shoshone National Forest’s Wind River ranger station in Dubois and U.S. Forest Service Law Enforcement Officer Dirk Chalfant heard about it the next morning. He began making calls and soon found the horse’s owner.

“I learned the horse had been in the park for six weeks, at a least three of those six weeks it was in about 5 feet of snow,” Chalfant said, “and occasionally 30 below zero.”

Just before Christmas Chalfant, the outfitter owner and his son headed into the park to save the mare, a 40-mile round trip in below zero temperatures. When the horse spotted her rescuers, she made it clear she did not want to be left behind again.

“She didn’t want to spend another night back there alone,” Chalfant said. “If we had to leave her and drive away, I think she would have been heartbroken.” 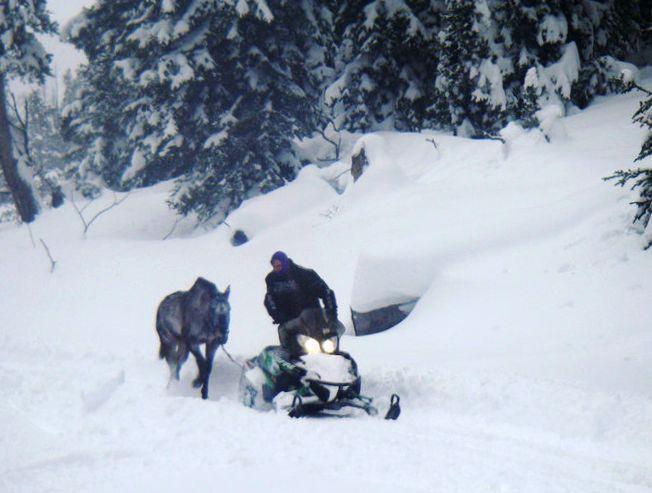 Valentine was given hay and after eating the group started back down the mountain. The men used their snowmobiles to pack down the snow making a path for the mare. A storm made efforts difficult, dumping 8 inches of new snow as they worked. Slowly they worked their way down the mountain while the trail groomer who originally spotted the mare worked his way up.

“That horse would walk in our tracks and break through 5 feet of snow,” Chalfant said. “We just took the time it took. She never quit.”

Eight hours later the group reached the parking lot, loaded the mare in a trailer and drover her home.

Chalfant said, “We didn’t think we could get her out. But all the stars aligned. To me, it was a Christmas miracle.”

Predictably, many people are calling for the outfitter’s head. Some are calling this a case of animal cruelty and negligence. A local resident who knows the outfitter says he takes good care of his stock and offered another point of view.

“The mare became ill and was lying on her side, groaning, breathing heavy and unable to move, he said. “The unarmed wranglers had the option of trying to kill her with a knife or leaving her hoping the horse would get well and follow the trail out. That would be normal horse behavior, to follow the trail back. The outfitter and staff checked the trailhead frequently and talked to people using that trail. No one had seen her. They surmised she had died and been picked to the bones by predators.”

Last word on Valentine – she was in the pasture beside the outfitter’s house “and doing just fine.”