A Holiday Miracle in the Stable

The holidays are imbued with wonder and surprise. Last year Jenni and Guy Benson, warm blood owners/breeders of Saratoga Studs in South Africa received a particularly special surprise. Jenni’s prize mare, Treliver D’Aquitaine, Daisy, was pregnant with her first foal.  She was a week past her due date and anxiety levels were soaring.

Finally, Daisy went into labor. The Bensons raced to the stable in time to help a palomino colt into the world. He was quite small given Daisy’s size, nearly 18hh. But he was healthy and beautiful and that was all they had hoped for. As the Bensons fussed over the foal, Daisy seemed to go back into labor. She began pushing but would not lay down, she was too interested in her new baby. Concerned, Guy carefully reached inside to check the afterbirth, instead he felt two feet. Twins! The second foal was gently guided out falling into their arms. The little filly was tiny but breathing, a miracle. And she made it immediately clear to all that she was a determined individual. Within minutes she was standing and trying to nurse. 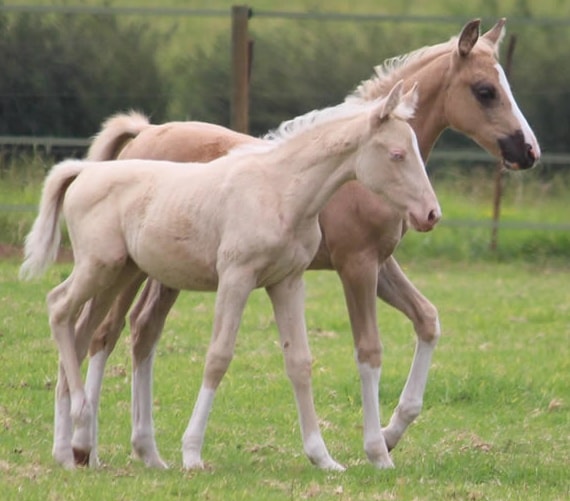 The precious gift of life was bestowed not once but twice, truly the best gift for any holiday. A year later the palomino colt, Saratoga Don Quixote and his cremello sister, Saratoga Duet thrive.

“They now spend every day out all day and stay side by side only going to mom for a drink but spending most of their days grazing together and meeting the new foals as much as the new mom would allow,” Jenni says. “They are both very happy little souls who have brought us such joy over the last few months, both very tame and enjoy human company and will be part of Saratoga forever. We consider them our miracle after a tough couple of years and they will never be for sale.”

“We decided that the first day of the year – 1st of January 2015 would be a good day to let Daisy and her two foals out. We have never had a mare having to look after two foals so were not sure how it would go, Daisy had been in a stable for 6 weeks while Duet got strong enough so would she run off or would she stay with them and would she be aware of her second baby? She was a star mom, Quixote stayed at her side and Duet kept getting distracted and then would canter to catch up. They weren’t out for long and everyday we stretched their time out, now they go out with other mares and their foals and the twins stick together like glue – when a new mare comes near they run to Daisy who has a very big presence in the paddock and nobody messes with her babies, “said Jenni.