The November 26, 2017 episode visited Corryong in north-eastern Victoria. Heather met Joan Sinclair, one of the region’s most devoted horse and cattlewomen. At 83 years old, Joan is still riding and mustering cattle in the bush. She has lived on the same property since she was a few weeks old. She has married and buried two husbands, and when asked about her current relationship (with her two horses) Joan says, ‘they’re a lot less trouble than men’. 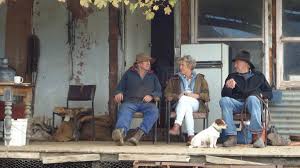