500 Years and Running -The Kiplingcotes Derby

The Kiplingcotes Derby has been run every year near Market Weighton, East Yorkshire (UK) since 1519. The race is held the third Thursday of March at 11 a.m. This year’s race marked its 500th anniversary.

The annual race is a four-mile cross-country course. The race starts near the defunct Kiplingcotes railway station and ends at Londesborough Wold Farm. Besides it’s long history the race embraces several quirky characteristics.

If you think it’s hard to carry on an annual tradition for 500 years, you would be right. In 1947 harsh weather prevented the start of the race. In order that the centuries old tradition continue a local farmer led his horse through the course during the blizzard. In 2001, when an outbreak of Foot and Mouth disease prevented transportation, another local farmer and horse again walked the course as the soul competitors.

Tracey Corrigan and her horse Frog beat this year’s record field of 36 competitors. This was their 4th win. 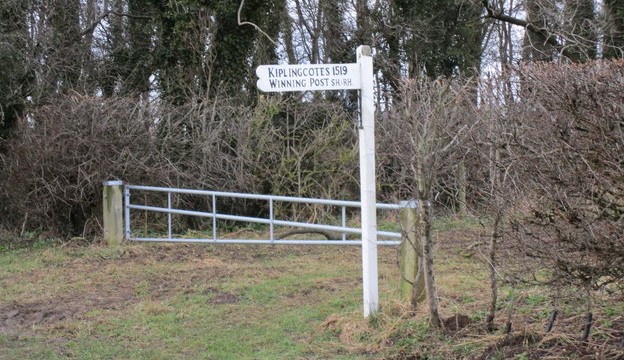 The finish line for the Kiplingcotes Derby