Rita Dunn is a busy grandmother living in Tennessee.  Her horse, D Grande Finale stays at a friend’s barn but she does all her own horse care:  feeding, grooming and stall cleaning.  She rides 5-6 days a week and takes clinics from Jim Koford and Gigi Nutter, but has never sent Finale away to a trainer.  Rita only has access to a regulation small dressage arena at her home barn rather than the regulation large arena dressage shows are held in, drives a second-hand Chevy pickup, and hauls Finale in a 30-year-old bumper pull trailer.  When the larger competition arena is needed, she is fortunate to have friends willing to let her ride with them.

The relationship Rita and Finale share is enviable, certainly worthy of a WARHorse write up.  It’s what this dynamic duo has achieved in the dressage ring that makes their story like a Hollywood movie plot.  Rita bought Finale in 2004 as a young 3-year-old Welsh Cob/German Riding Pony when she was 61 years old.   After six years the pair had attained both USDF Bronze and Silver Medals.  By July 23, 2016  Rita (73) and Finale (15) got their scores at Grand Prix to earn the USDF Gold Medal.  At the time it was awarded, Rita was the oldest rider in the U.S. to achieve that honor.

Rita has always enjoyed working with horses.  She is a Certified USDF Dressage Instructor (Training – Second Levels).  As a NAHRA Advanced Certified Instructor for both cognitive and physical disabilities, she was the head instructor and facility manager for the Northern Virginia Therapeutic Riding Program for 23 years.  She also ran her own riding program for many years.   Though mostly retired, Rita still works with some private dressage students.

I had the pleasure of speaking with Rita shortly after she received her medal.  She wasn’t available to talk in the morning; she and Finale were going for a ride.  I planned for a 45-minute interview that became a captivating 1 hour and 45-minute chat. 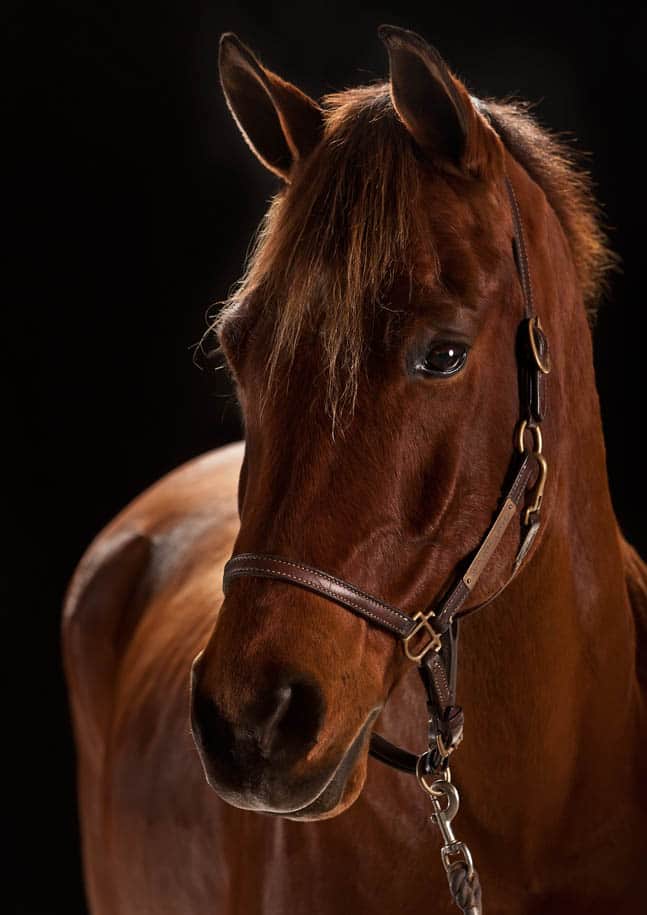 When you were shopping for a horse, what sold you on Finale?

I was looking for a German Riding Pony to train and ride in clinics with no show aspirations.  I went to Klaus Biesenthal’s Bell Oaks Farm to look at a lovely 3 ½ year old.  Before I saw that horse, we went into a field of 25 youngsters who came up to see what we were all about but not crowding us.  Finale was 2 ½, stood at the back of the group looking straight at me.  It was as if he were saying “I’m here.  I’m special.  You better take a look at me.”  Although I really liked the 3 ½ year old, he didn’t work out for me.  Klaus sent me a video of Finale 3 months later after he’d been under saddle 17 times.  I had him vetted and bought him without ever having sat on him!

D Grande Finale, named because he is my last horse, is a pony through and through.  He loves children and loves to hang out in the middle of a group of kids.  I give riding lessons to my grandchildren which he thoroughly enjoys.  He is very hands-on, and busy.  If he gets bored, he will move things around to suit himself.  As a 3-year-old, he removed the padding in my trailer and pushed the screens out of the windows, and I hung dog toys in front of him so he could entertain himself.  If he’s thirsty and needs water, he will bang his buckets.  When he gets tired lunging he will nicker softly to say “enough please”.  I’ve never had a horse with this much personality.  He’s not disobedient and he’s reliable although he can match rodeo bucks when he’s turned loose and feeling good.  Generally, his behavior is the same at home or at a show.

What are Finale’s strengths as a top level dressage horse?

He will try anything I ask him to do, although he might argue a little but only because he doesn’t understand.   He has the ability to do the difficult movements and generally his attitude is “OK, I can do that.”  Once he learned how to do a single flying change, the sequence changes, even the changes every stride, were easy for him.

What is your riding regime?

We ride 5-6 days a week.  I don’t believe in drilling.  We work in the ring, walk in the field, and some days haul to a friend’s house to trail ride.  I try to plan our rides to keep his mind fresh.

How do you handle being nervous at a show?

Finale settles into a new place easily.  He is not troubled by going to shows and it’s no big deal for him.  The day before our class, we have a quiet walk all over the show grounds.  Before we compete I try to keep the same warm up we have at home.  It isn’t always easy to do with a dozen people warming up together.  When we do the same routine, it helps the show feel like just another ride.

What was your motivation to compete and attain your Gold Medal?

Finale is always willing to do things.  A year after I bought him, he was High Score Champion at a schooling show with a 79.04 at Intro B and a 75.9 at Training Level.  I decided that day to see what he could do in the show ring; that maybe there was more that “just” a clinic horse here.  Five years later, he was Tennessee State Champion at Prix St. Georges.  After each show I kept thinking to myself “he’s doing well; let’s see where this goes”.  This year we were so close and only needed two good rides at Grand Prix to get our Gold Medal.  I decided to prove to myself and Finale that we could do this, and as usual he responded with “OK, let’s get it done”. 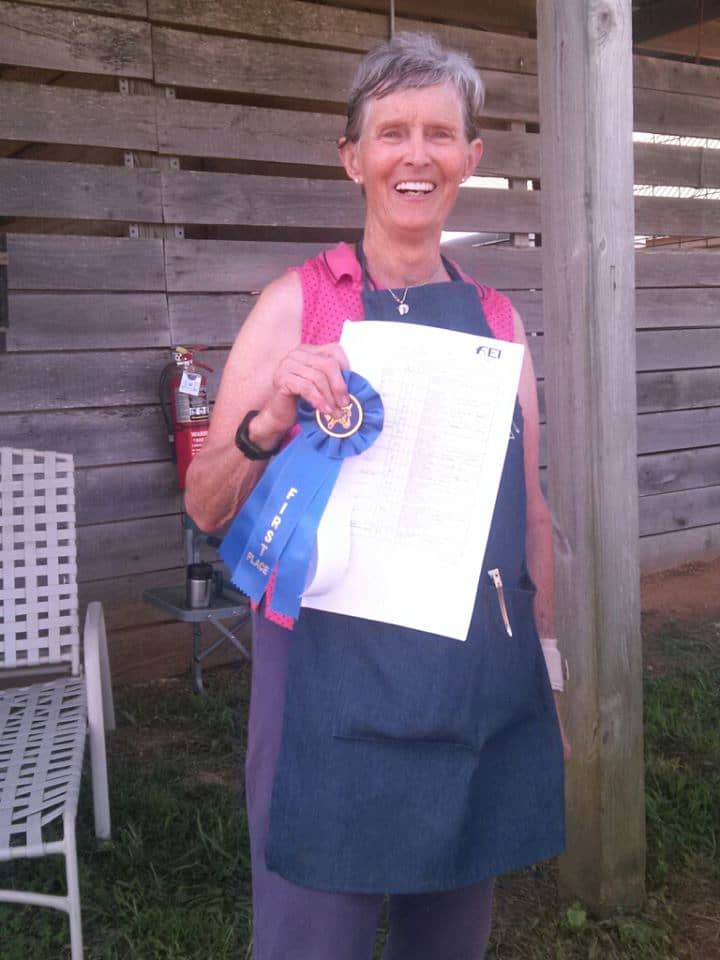 What impediments have you encountered and what kept you going?

Like everyone, we have both had challenges.  In 2005 I went through surgery and radiation for breast cancer.  In 2010 I underwent knee surgery for a torn meniscus.  In 2012 we lost almost a year to lameness before Cushing’s Disease was found to be the culprit.  Last year he fractured a splint bone playing in the pasture and was off 6 months letting that heal.

What are your future show plans?

I may try to put together a Musical Freestyle, continue to hone our Grand Prix moves, and certainly will do some trail riding.

Do you have a good luck routine or trinket?

I have a Jane Heart gold and silver horse necklace I bought during my bout with breast cancer.  I wear that at every show.

I don’t think they’re supposed to make these kinds of comments, but the one I remember very well was “Nice tail!”

What your most useful or under rated piece of tack?

I have a County Fusion saddle that was made for Finale and adapted slightly for me to keep my knees from hurting.  When I got the saddle, I was amazed at how much his extended trot opened up and how much easier it was for me to sit the extended movements.  I couldn’t have done it without it.

What advice do you have for older riders?

Riding helps keep you young by improving your physical strength, keeping your mobility, and lifting your spirits by giving you something fun to do every day.  Above all, just keep riding!

Thank you, Rita and Finale, for giving WARHorses insight into your world.  I believe every little girl dreams of achieving something amazing with her horse and in her own way – Elizabeth Taylor did it in “National Velvet”.  It is a pleasure to meet a lovely woman who has reached the top on her terms riding the horse of her dreams.

Thank you Suellen Slockbower for this story tip and Gigi Nutter for making introductions.