Mr. John W. Horner, 2034 Eutaw Place, was thrown down and run over yesterday by a runaway horse attached to a buggy. His left shoulder was dislocated and his left side and leg were bruised.

The horse, which was owned by Mr. Edward J. Mabbett, was standing at the corner of Mount Royal Terrace and Reservoir street when it became frightened at some children and ran up the terrace, into the park and through the Eutaw Place gate to Boundary avenue, where it fell, but got up again and started down Eutaw Place on the sidewalk.

Mr. Horner was standing at his door, with his horse and carriage at the curb. Seeing the runaway horse coming down the street, he caught hold of his own horse to save it and was caught himself between the two teams and thrown to the ground. Mr. Horner was taken to the office of a physician.

Meantime, the runaway continued on its journey until Dolphin street was reached, where Police Sergeant Moon, of the northwestern district, attempted to stop the horse. Just then the horse slipped and fell on the sergeant, bruising his left leg and side, but the sergeant held on until others took hold. Then the sergeant was taken to his home, 1840 North Gilmor street, in the patrol wagon. The horse was returned to its owner. The damage to the buggy was $15. 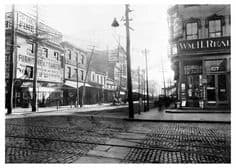