The 2018 FEI World Equestrian Games will be held at the Tryon International Equestrian Center in Mill Spring, N.C., from Sept. 10 to 23.
The Fédération Equestre Internationale Bureau today unanimously agreed that the WEG should be awarded to Tryon, meaning that the FEI’s flagship event remains in North America, following the withdrawal of Bromont (Quebec) earlier this year.
The original dates for the WEG (August 12-26) have been changed following two scientific studies commissioned by the FEI, which stated that climatic conditions would be significantly more favorable in North Carolina during September, particularly from a horse welfare perspective. The FEI also looked at date clashes with other fixtures on the FEI calendar to ensure the optimum time slot for the 2018 Games.

“We are very pleased to announce Tryon as the host of the FEI World Equestrian Games 2018,” said FEI President Ingmar de Vos. “The Tryon team submitted a really impressive bid, and we have every confidence in the organizing committee. It’s a truly spectacular venue and almost all the necessary infrastructure for our eight disciplines is already in place. We are looking forward to a fantastic celebration of top level sport as all the disciplines come together to crown their world champions at the Games in two years’ time.” 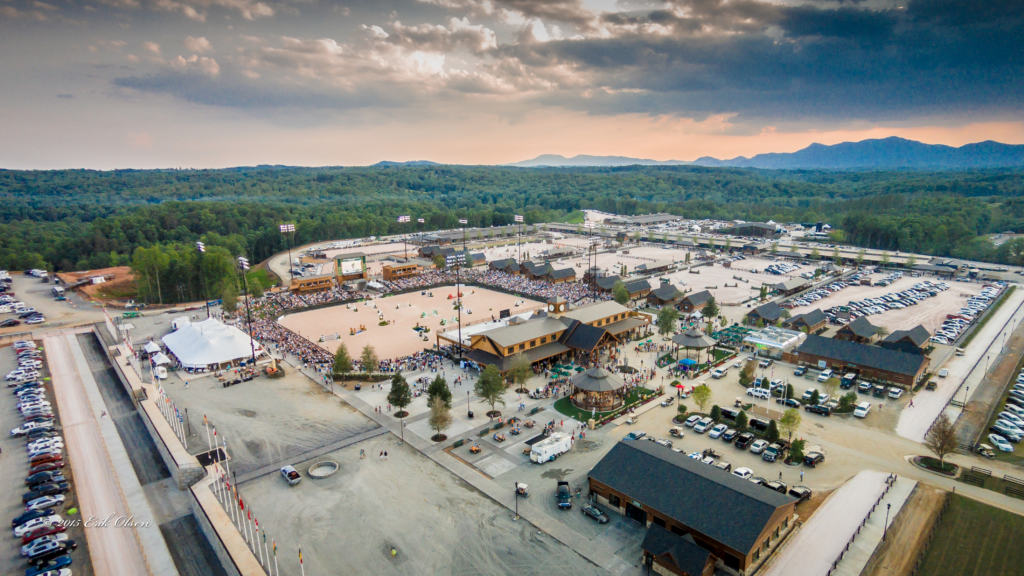 The Tryon International Equestrian Center, created by Bellissimo in Mill Spring, is situated on a 1,600 acre site at the foothills of the Blue Ridge Mountains. The venue has 1,200 permanent stables, 12 arenas including a floodlit international arena with a potential spectator seating capacity of up to 12,000 and VIP seating for up to 1,500, a covered arena with 5,000 seats, and has a world-class cross-country course that will be used for both eventing and driving. The venue is surrounded by hundreds of miles of equestrian trails for endurance. The venue contains excellent facilities for athletes and spectators including restaurants, hospitality, accommodation, retail and resort amenities. An on-site state-of-the-art veterinary facility is currently under construction.

“We are thrilled with this news and thank the FEI Bureau for having faith in us and entrusting us with the honor of hosting this prestigious event,” said Bellissimo. “It’s a really great fit for North Carolina’s equestrian heritage, and we look forward to working closely with the FEI and with the USEF to produce fabulous FEI World Equestrian Games in 2018.”

The 2018 FEI World Equestrian Games were previously awarded to Bromont, but a lack of secure funding led to mutual agreement between the FEI and the Canadian Comité organisateur des Jeux Équestres Mondiaux 2018 (COJEM) to terminate the host contract in July of this year.
Following the withdrawal of Bromont, the FEI Bureau mandated the president to find a solution and, after a thorough assessment of a number of options, the president proposed that the Bureau allocate the WEG to Tryon. In light of the timeframe, with the Games in less than two years, existing infrastructure was a crucial factor in the evaluation process.
The Bureau met by teleconference today (Nov. 3) to agree the allocation and were unanimous in their support of the Tryon bid.

“The FEI is 100 percent committed to the FEI World Equestrian Games concept, and we are extremely grateful to all those that showed interest in hosting the 2018 Games,” de Vos said. “Their enthusiasm demonstrates the importance of the event across the equestrian community.”